Explanation of conditional probability: If X happens, then... 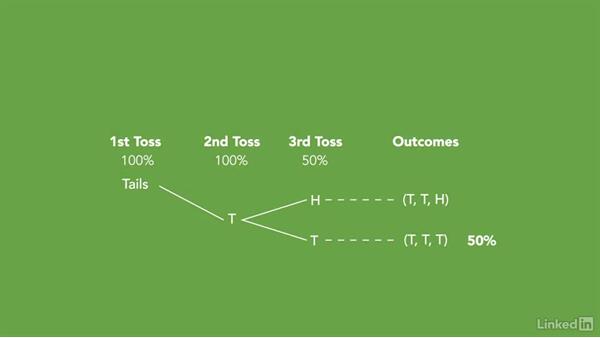 Explanation of the concept of conditional probability. Using probability trees to visualize these types of scenarios.

- Suppose I have the names of six people, and I put one person's name on each of six cards. I'm gonna pick two cards at random and award each person whose names are on those two cards $100. Let's say Jose and Sally are two of the six people on my list, what are the odds I will pick both of their names? Well, here are the 15 possible outcomes, only one of which contains both Jose and Sally. So, the probability that both will win together is 1/15 or 6.67%.

Let's say I change the way we play the game. Let's say that instead of picking both cards at the same time, I will pick one name and then pick the second name a few minutes later. What are the odds of both Sally and Jose winning if the first card I pick has the name Audrey? For this, we use the concept of conditional probability. This helps us answer questions like this one. In this case, now that Audrey is one of the winners, it is impossible for both Sally and Jose to win.

The probability that both Sally and Jose are the two winners has dropped from 6.67% before we picked Audrey's name to zero after Audrey's name was picked. But, what about if Sally's name was on the first card? What are the odds that both Sally and Jose win now? Remember these were all of the possible outcomes. But now that Sally is out of the pool of names, here are the five possible outcomes that remain.

We get that by multiplying the probabilities along this branch. Once we flip, the first tails, though, the odds of getting tails three times in a row increases to 25%, only two parts of that branch remain. After the second tails is flipped, then the odds jump to 50%. Let's look at one more problem that does not include cards or coins. Here's a set of health-related data: 1,000 people, how long they lived, and whether or not they exercised at least three days per week.

According to this data, it looks like exercising three days per week might have its advantages. I guess we can say that working out is an enormous factor in living past 85. Not so fast. Don't go overboard. People who are committed to working out three days a week likely have other good habits. So, the exercise alone may not be the only contributing factor. Understanding how to calculate conditional probabilities is very important in the world of statistics.

But understanding what those numbers might mean and knowing which questions to ask, that might even be more important.

Video: Explanation of conditional probability: If X happens, then...