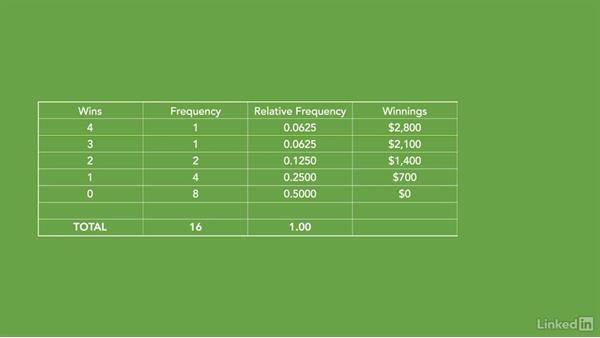 - Suppose you're considering entering a team into a 16 team basketball tournament. The competition is a bit expensive though. The entry fee is $750, but most of the money, $10,500 will be awarded back to the teams as prizes for winning. There are four rounds. Every time your team wins a game, your team wins $700. The big question, of course, is should your team enter the tournament? For this, we can use a variation of the mean for a discrete probability distribution.

Let's use this table to see how the tournament would play out. Only one team can win the championship. That team will win four games. One team will lose the championship game, but they will win three games to get there. Two teams will only win two games. Four teams will win only one game, but eight teams will lose in the first round, and thus, they won't win any games. With 16 teams in the tournament, we can now calculate the relative frequency for each of the win totals, and if a team wins $700 every time they win a game, here are the total winnings awarded for four to zero wins.