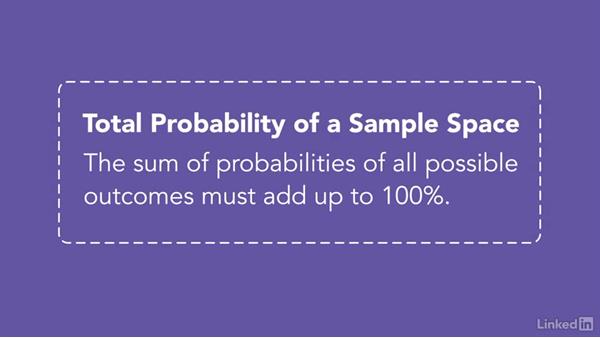 3 possible outcomes. All equally likely? Some more likely than others? What's the max and min probability?

And in London, there are typically over 100 days per year when it rains. In these cases we say that the odds are weighted. The odds that it might rain on any given day in Los Angeles is about 7%, and about 29% in London. Then again, we also need to remember that these probabilities are stated on the basis of an entire year. If I instead say, what are the odds that it will rain on December 10th in London? The probability of rain on that particular day may be much higher since December is traditionally London's wettest month.

On the other hand, what are the odds that the ball you take out of the container will be white? There are no white balls in the container, so the odds are 0%. This outcome is not possible. These are both simple scenarios, but they help us understand a few basic things. The highest probability for any scenario is 100%. The lowest probability for any scenario is 0%. So, to recap, the probability of all possible outcomes must sum to 100%.