Empirical rule: What symmetry tells us 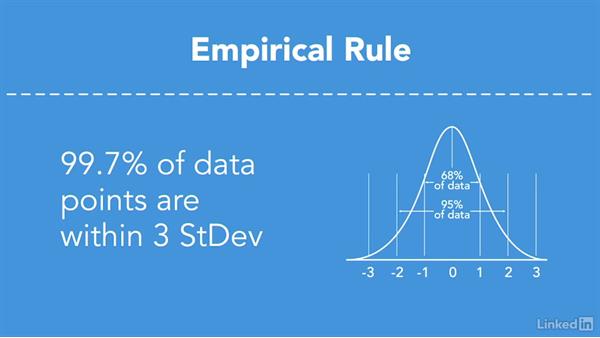 One, two, or three standard deviations? The answer to this question tells us something about our data points/sets.

- The empirical rule, that sounds a bit scary, doesn't it? But is it really that intimidating? It's not. Actually, it is quite simple and in the end, very useful for understanding the distribution of data points in data sets. So, what is this empirical rule? First, it's important to note that this rule works for symmetrically distributed data, often illustrated by a bell-shaped curve centered on the data set's mean. Once we understand this, the empirical rule explains how this symmetrically distributed data follows a pattern whereby most of the data points fall within three standard deviations of the mean.

Again, notice how this is illustrated in our bell-shaped curve. Finally, the empirical rule tells us that when you have the bell-shaped curve, often referred to as a normal distribution, 99.7% of the data points in the data set will fall within three standard deviations. So, as you can see, now almost all of the area under that bell-shaped curve has been accounted for. One very important note, this works when we have the well-centered, symmetrical bell-shaped curve.

The rule begins to lose value the farther our data set strays from the classic normal distribution. That said, in most cases, the 68-95-99.7 rule, which we call the empirical rule, holds up pretty well. With this knowledge, you can, hopefully, better evaluate data points. If someone says that a data point has a Z-score of 1.8, you know it's within two standard deviations of the mean, and thus it is likely among 95% of all the data points in the data set.

That said, if something had a Z-score above 3.0, we could be pretty confident that this data point was a true outlier, since it is likely not among 99.7% of all the data in our data set. In terms of our bell-shaped curve, this data point would likely be out of this region. No matter if you call it the empirical rule, the three sigma rule, or the 68-95-99.7 rule, we now better understand the normal distribution of data in a way that allows us to better understand our data set and the data points that lie within that data set.