Determining when to part ways 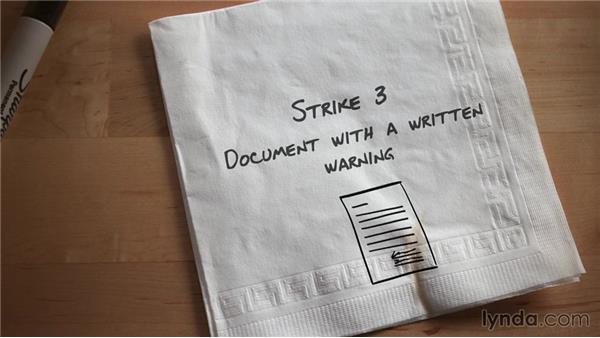 - It's often difficult for a business owner to let an employee go. You've invested a lot of time, money, and emotional effort into helping them succeed. It's natural to want to avoid letting them go. I've seen, as a business coach, many small business owners struggle deeply with the decision to fire an employee. As a result, they very often err on the side of keeping the employee too long. The business owner hopes that the employee will do better, they want them to change.

But rather than helping, this can drag the process out for a long period of time, and often still results in the employee's termination. This is neither beneficial to the employee nor the business. In this video, I'm going to share a four step process you can use to consider whether or not it's time to let an employee go. I call it my Four Strikes System. So, if you're a fan of baseball, rather than three strikes you're out, it's four strikes you're out. Strike one occurs when an employee does something improperly within the business.

At strike one, my recommendation is to ignore the behavior. Now, of course, if it's something entirely inappropriate or illegal, then you'll have to take swift action. What I'm referring to here, though, are the common, everyday kinds of mistakes that people make simply because they're human. The first time you see one these, let it go, do nothing. Why? Often people feel bad about the mistakes they make and seek to correct them. Give your people the opportunity to stumble a little bit, it's part of the growing process.

So, I recommend stepping back and letting the growth occur. But, if the same improper action occurs the second time, strike two, then we move onto a verbal correction. So, in the second instance, we go to them, and say, for example, "I've noticed that this is the second time "that you've arrived five minutes late," or, "I'm "concerned because I see that this is a pattern." Again, because we waited for the second instance, now we can refer to it as a pattern, rather than just a one time occurrence.

In addition with the verbal correction, I would ask the employee, "What steps could I take to help you do better with this." That puts you in a position where you're a helpful resource, rather than a taskmaster. Try to engage them in a dialogue to explore how to improve their actions. Then, follow up with them and hold them accountable for making the change. But, what if they still don't improve? Strike three. At this point, we move to a written warning.

I recommend that your business has a standardized system for these kinds of warnings. This will help you be an impartial judge when it comes to your employees. It will also protect you legally when it comes time to make the termination, because there will be a paper trail. In the written warning, we want to be as specific as possible about all the things that happened. Then, along with filing away in company records, we want to deliver this warning personally to the employee, and discuss it with them.

We let them know that this is the third time we've seen something happen, and we need it to be corrected. Again, you can ask them, "What can I do "to help make sure that this doesn't happen again?" Build an action plan together, and do what you can to help them follow it. But what if we reach strike four, meaning the action appears a fourth time. Then, it's time to let this employee go. There is a consistent pattern of behavior, and they are not correcting it.

This change may be the opportunity they need to truly advance in their career. Also, when you remove employees who consistently do not perform as they should, you'll help the other employees working for you. I've seen many times that in businesses which kept underperforming employees for far too long, after the business owners terminate that employee, their coworkers come forward and say, "Oh, I'm so glad you did that. "The workplace is so much better now that that person is gone." Now, one final word of caution.

Every state or region has different laws when it comes to firing employees. I would recommend that you consult with a legal adviser to get the best picture of what the requirements are in your area when it comes to terminating an employee. Firing an employee is never pleasant, but sooner or later, it's an essential part of running a small business. Hopefully, this process I've shared will make it a bit less painful for you.

Video: Determining when to part ways