Combinations: Permutations without regard for order 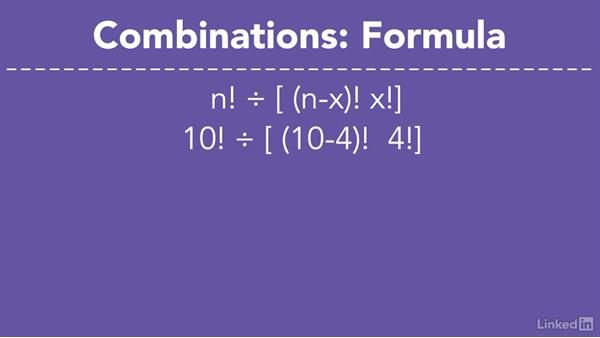 What happens when ABC and CBA are the same thing? Describe and calculate combinations. Permutations vs Combinations.

- Sometimes the order of things matters. Other times it doesn't. For example, if we have a group of five long jumpers at a competition, and each competitor gets only a single jump, there might be an advantage to going last. Why? Because this jumper, the one going last, he would know which was the distance to beat. If we were trying to figure out the probability James would go first and Andre would go last, we'd need to know how many permutations of these five jumpers was possible.

Here are a few of the 120 possible permutations. The order of the jumpers is vital here. On the other hand, let's consider a different scenario. Suppose we have 10 students in a class, and one team of four students was going to be chosen at random to represent the school at a prestigious competition. If we were trying to figure out the probability that both Olivia and Layla would be chosen for the team, we'd need to know how many combinations of four students would be possible.

So how are combinations different than permutations? Well, let's say the four students chosen for this team are Olivia, Wilson, Waldo, and Layla. This team is no different than this one, which has Wilson, Olivia, Layla, and Waldo. When we create teams, the order in which we list the names does not change the nature of the team. So let's take a look at the formula for combinations.

If we can cancel out the redundant items on top and bottom, we get this, which tells us that there are 210 possible teams of four. Let's now say we actually wanted to know the probability that Olivia and Layla would end up on the same team. Well, we know that to have a team that fits our desired event, we will need Olivia and Layla on that team. So really, we are trying to figure out how many combinations of our eight remaining students can fill those last two spots.

In this case, we have eight remaining students in the class, so that's our n. And we need two students to fill up those two open spots on our team, so x is two. Eight factorial divided by the quantity eight minus two factorial, times two factorial. If we perform this calculation, we get 28. So that means that out of the 210 total combinations of four students in the class of 10 students, there are 28 combinations of four students where both Layla and Olivia are on the team.

28 desired outcomes divided by 210 total outcomes. There is a 13.3% chance that Olivia and Layla will both be on the school's team. So now that you understand combinations and how to calculate them, you'll be able to figure out how many different ways there are to arrange people into teams and groups. Perhaps you'll be able to figure out how many combinations of poker hands are possible. You might even start to consider how many four-character passwords that include both numbers and letters are possible, and more importantly, now you might better understand how to calculate probabilities.

Video: Combinations: Permutations without regard for order