Calculating percentiles: Where do you stand? 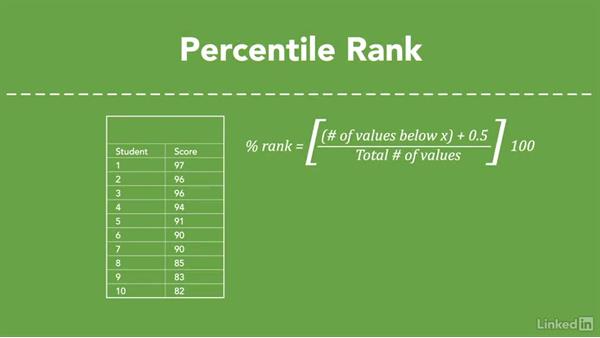 - Perhaps a person is trying to get into a prestigious university like Harvard or Stanford. Maybe the university requires that the student takes a standardized test like the SAT. The student takes the exam and they later receive their results. Would this student rather have their score be in the top 4% of all scores or should they want their score to be in the 96th percentile? It's a trick question. Both are the same. A score in the top 4% would be the same as a score in the 96th percentile.

Similarly, a billionaire with a net worth in the 99th percentile is what many would call a one percenter, a person whose worth was in the top 1% of all individual net worths. Now, a pretty simple concept to grasp, but there is one common error that many people will make. Often with exam scores, a person may confuse the score on the exam with a student's percentile rank. For example, suppose a student gets an 85% on an exam.

This does not mean that this student is automatically in the 85th percentile. Why? Well, let's look at this distribution of 10 exam scores. Our student got an 85% on the exam, but that was the third lowest score in the class. Conversely, we can look at this set of 10 exam scores. Here, our student also scored an 85%, but now, they had the highest score in the class. Which then begs the question, how do we calculate the student's percentile rank? To calculate percentile rank, we use this formula.

As you can see, we need to count up the total number of values in our data set. For our most recent example of 10 exam scores, we have 10 values. Next, we count up how many values are below the score of 85%. For this data set, our student had the third lowest score. Only two exam scores were below this student's score. So this is how we set up our formula. According to this, our student scored an 85% on the exam, but she is in the 25th percentile.

Let's do the calculation again for other data set. Here, our student had the highest grade in the class. Nine other scores were below her score. In this data set, our student is in the 95th percentile. Did you notice what just happened there? We had 10 exam scores, yet the highest percentile that could be achieved was 95. Why? Well, a 100th percentile is not possible, since that would be like saying that you are in the top zero percent of your class.

The best that one person could say is that they are in the top 1% or the 99th percentile. Still, why not put the student in the 99th percentile? And if you use a spreadsheet like Excel, they have their own internal formula for calculating percentiles. In any case, the numbers are often close enough that it should not present a significant problem, and often, as the size of the data set gets bigger, these differences become negligible. So for the competitive folks out there, you now have two ways to frame your goal.

Video: Calculating percentiles: Where do you stand?