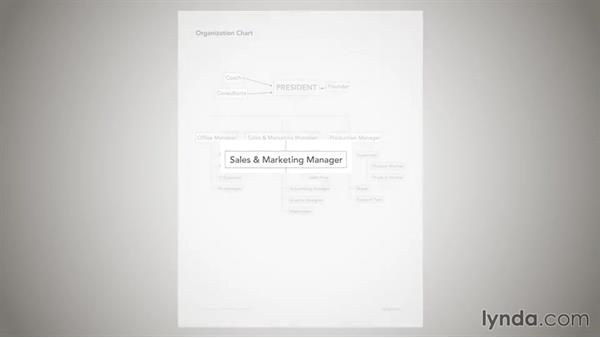 - If you were a home builder would you ever attempt to build a home without a blueprint? Of course the answer is no, yet all too often I see business owners doing exactly that with their small business. In a business the blueprint is the organization chart. This is simply the structure that shows the boxes and the lines of what positions people hold, and how they all relate to each other. To make this easier for you I've created an example, a sample of a generalized organization chart, it's in the exercise files for this course.

The idea is that you're going to take this as a starting point, and then create your own org chart by making your own adjustments. Keep in mind that as we go through this process it's normal for people in a small business to fill multiple positions. They may not just have one position in the org chart, they may have two or three, or in your case 10. Now let's take a look at this example org chart, by starting at the two top positions. The founder and the president, the founder is the visionary of the business.

They're the one who had the great idea, they're the figurehead, they go out and talk to people about how wonderful the business is. The president, on the other hand, is the person who's responsible for actually making the vision happen. They're responsible for the overall success of the business, and the day to day operations. Now, you can call these positions whatever you want, but the question for you is, which roles are you filling? If you're a solo entrepreneur, odds are you're filling both those positions, which is fine.

Now, off to the left you'll see boxes for consultants and coach. Consultants are people who advise your business, such as a lawyer or an accountant, and the coach that represents the business coach, or if you have a mentor something like that. You can put the names of the people who fill those positions underneath those boxes. Now let's look at the big picture of the organization chart. You'll see that it's divided into three main areas. On the left we have office manager, that division is responsible for all of the backend stuff in your business.

The numbers, the grease in the wheels, their job is to do everything that happens that doesn't interact directly with customers. In the middle you'll see sales and marketing manager, of course this division is responsible for bringing in new leads, and converting them into customers. On the right you see production manager, this is just a general term that applies to providing or producing whatever it is that we sell, and delivering it to people.

The next question is who is filling each of these positions? Who's the office manager, who's the sales and marketing manager, and who is the production manager? Put names underneath those boxes. Now you'll notice that there are other positions underneath each of these divisions, don't get too caught up in what I called those positions, just change them however you see fit. If you're using a different title, feel free to change that title, but the idea is we want to represent who's doing what in all these positions.

Also, you may come across positions that are outsourced, or where you're using a freelancer. For example, in your business you may have a graphic designer that's outside of your company, so you could put their name there, but also a box or a circle that represents they're outside of your business. Feel free to customize this organization chart as much as you need, the idea here is that we're trying to get just the first draft, not perfection.

Now, after you create that first draft go through and put your name in all the boxes and highlight them. Call attention to the fact that as the business owner you're probably filling multiple positions. That's okay and it's normal, but it also gives us a goal to work for. The goal is getting you out of all these positions, and getting into just one. Also, put a star next to the position that you want to fill.

Imagine five, 10 years from now the business has grown, you've hired people, what one position do you want to be? Star that, and then of all the positions that you're filling pick one that you think is the easiest and the most likely for you to replace next, and put an exclamation point next to that. This is saying, here's a target, I want to stop doing this thing in the organization chart, and you can work toward doing that.

Remember, the org chart is a blueprint for your business. It's just something that outlines how the business needs to be in order to operate, but ultimately having this blueprint is going to move you toward having freedom as a business owner.