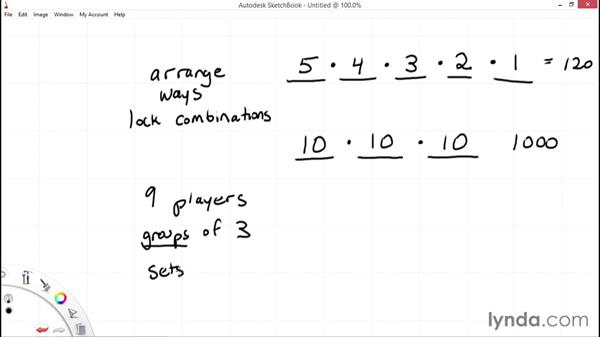 - All right. In this movie, I'm gonna explain some ways to count things, to count how many arrangements and groups of things that we can make. In math, we sometimes call these concepts permutations and combinations. For permutations, we're gonna think about how many ways we can arrange things. A lot of times, in a math problem, you'll see keywords like that. I'll write out a few keywords that signify that we're gonna do this particular skill. A lot of times when you see words in a math problem or in real life like arrange, how many ways we can do things, how many combinations we can make on a lock, we're gonna use what we call a permutation.

What we're really gonna do is see how many ways we can arrange things. The overlying concept is that the order of the things matters. Every single arrangement is different. I'll give you an example. Let's say you have a car that can seat five people. I'm gonna draw the car seats just in a row, like this. To figure out how many ways we can arrange five different people in the five seats, we're gonna think about it like this: In the first seat, there are five possibilities, because there are five people to choose from.

In the second seat, now we only have four people to choose from, because one is already sitting in the first seat. In the third seat now there are three possibilities, the second seat, now we're down to two people to choose from, and the final seat, that's where the last person has to go. So to figure out how many different arrangements we can make with these five people, we multiply all those numbers together. If we do that math, we're gonna get ... Five times four is 20, times three is 60, times two is 120.

There are 120 different ways that we can seat five people in a five-seat car. And each one of those arrangements is different. This is why we use this particular method. Let me give you another example where we would use a permutation. Let's say we have a combination lock. I'm gonna draw three slots for the three numbers on the lock. Let's say the lock has numbers from zero to nine to pick from for each slot.

You wanted to know, "Well, how many combinations are possible "for this lock?" Well, if we count the numbers from zero through nine, that's actually 10 numbers. One through nine is nine numbers, and then adding zero gives you a 10th. In the first slot of the lock, there are 10 numbers to choose from. That's actually true for the second slot, as well. Unlike the car example, it's okay if we repeat. So the third slot will also have 10 numbers to choose from. To find out how many combinations are possible for the lock, again, we'll just multiply all the numbers.

10 times 10 is 100, times 10 is 1,000 different possible combinations. We've been thinking about scenarios where order matters. But what about a scenario where order doesn't matter? This is, in math, somewhat confusingly called combinations. We can just kind of think of it like groups. I'll give you a scenario in which we have to consider how many groups of something we can make. Let's see. If we have a baseball team, on the field, there are nine players.

Somebody wants to know, how many groups of three players can we make out of the nine players? The keywords for problems like this are words like groups, or sometimes, you'll see the word sets. If you think about it, the underlying concept is that in the group, it doesn't matter what order the people are in. Let's call the nine players, let's give them letters. That's gonna be player A, B, C, D, E, F, G, H, and I.

Now, think about a particular group. Let's say we made the group A, B, C. It's the same exact group as C, B, A, because we didn't say anything about the order the players within the group. It's the same three people. We don't wanna double-count things. Now in math, in order to make sure we don't do that, we're actually gonna use a formula. Let me draw the formula out first and then I'll explain what it means.

Okay. The formula that I just drew here, the big number, that exclamation point. I know that looks a little bit weird, but that means factorial. I'll give you a quick example of that. If I had the number four factorial, that is the same thing, it's just shorthand for saying four times three times two times one. So when we see big number factorial, that's the big number in the problem, in this case, the nine.

Now, I know this is looking pretty messy and complicated. Just bear with me. We're gonna be able to cancel out a lot of things here. We see that we have six times five times four times three times two times one on both the top and the bottom of the equation. That means that we can cross them both out. They cancel. We're left with ... I'll rewrite it ... Nine times eight times seven divided by three times two times one. I'll take out my calculator so we can do that math.

Okay. Nines times eight times seven is 504. I'll divide that by three times two times one, which is six, and our final answer is 84 different groups of three that we can make out of those nine players. Remember, when you're counting things and you care about the order, like in a combination lock or how many ways you can arrange people in a car, we'll use the first formula, which we call a permutation.

If the order doesn't matter, like when you have to figure out how many groups you can make, use the groups formula. Go ahead and open up the exercise files for chapter seven, find the file called Arrangements and Groups, and try a few of these questions on your own.

2/10/2015
This course explains essential math concepts in clear language, using real-world problems that will help learners of all levels feel more confident with math. Learn how to calculate percentages for tips and taxes, compare prices as you shop, find the area and volume for home-improvement projects, and even calculate calories. The sections are organized into three foundational areas and four real-life areas. Author Vince Kotchian even points you where to go on your next step to math proficiency. Start now and learn the basic math skills that make everyday life a little easier.
Topics include: