Anatomy of an NDA 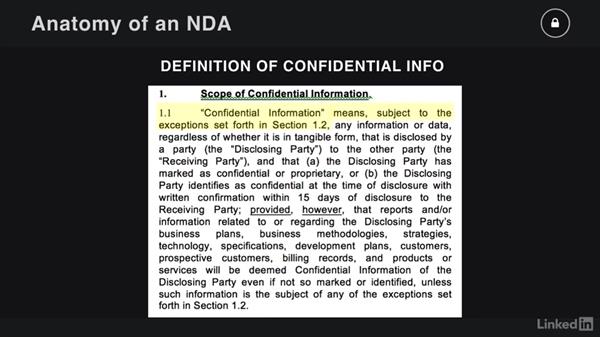 NonDisclosure Agreements, or NDAs for short, are among the first legal documents that most creatives end up dealing with. They are used when confidentiality is important. So what are the parts that make up an NDA? In this movie, author Seth Polansky walks you through what pieces are needed to form an NDA.

- So let's take a look at several flavors of nondisclosure language. Dissect a nondisclosure agreement, and call out those areas that absolutely must be part of any good NDA. There are two main types of NDAS. The most important distinction between them, is whether the agreement is unilateral or mutual. That is to say, are both parties to the agreement bound to confidentiality, or is only one side bound. Unilateral, or one-sided NDAs are generally used by larger entities or businesses, to protect the information they're sharing with freelancers, contractors, and employees.

Like Sony, protecting work on one of it's films. We'd use mutual NDAs for things like business partnerships. Let's say two production companies wanted to do a project together, and needed to ensure confidentiality. Both would be bond. Next, we want to ensure the following items are included in any nondisclosure agreement. One; The Parties: Who exactly is bound by the contract? Two; Term: When does your obligation begin and when does it end? Three; Definition of Confidential Information: What exactly is to be kept confidential? Is it tangible items? Does it include spoken information? Four; Protection: How do you protect someone else's information? What is your duty or standard of care? Five; Remedies: What resolutions are available to the other party, if you breach? Indemnification penalties: What your liable for monetarily or otherwise, if you breach.

And Seven; Choice of Law: If there's an issue, where do you litigate or arbitrate, and which jurisdictions law applies? So what is a party? A party is a person or legal entity. Bob Smith, or Sony Music America Inc. Why is this important? Because it tells you who is actually bond by the confidentiality obligation. It tells a court who is liable for any breach, or, who may bring suit for breach.

You should be careful here, make sure that you know who is on the other end of the deal. Is it Bob Jones, or is it The Walt Disney Company and all affiliates? Simply put, the term is when your confidentiality obligation begins and ends. Why is this important? Well, for obvious reasons. Until you've hit the date the contract says it's okay to disclose, keep it shut. You should try to negotiate terms as narrowly and for as brief a time period as possible. Now I should mention here, that a term does not have to be a specific time frame.

It can be something in the realm of, when the film is officially theatrically released. Definition of confidential information. This is incredibly important. These definitions can be as simple as, the footage delivered to you on X date, or complex as this. Let's break this down. It looks complex, and it is, but if we break it down into smaller chunks, we can see why these terms and conditions are dangerous. First, it references exceptions in another section of the document.

So you need to look at even more complicated legal language somewhere else in the document, to understand just the first few sentences. Second, it includes information that you could hear about now, but not know is confidential until you receive a letter or email sometime in the next 15 days. And finally, it includes a whole laundry list of items that don't need to be marked as confidential, and will be considered confidential, even if only peripherally related to some item on that list.

Have I frightened you enough yet? The best guidance I can give you in this area, is to simply air on the side of caution. Unless you know for a fact that you are contractually permitted to discuss something, don't. Be discreet. Now it's all well and good to contractually obligate someone to confidentiality. But if your contract doesn't include a requirement that they provide reasonable protection, locking it up at night, password protecting the files, etc. Your nondisclosure agreement isn't worth the paper it's written on.

Remedies stipulate the "remedy" or legal "cure" a wronged party may invoke under a contract. Most nondisclosure agreements are horrifically one-sided in favor of large companies. You should always pay close attention to what you're agreeing to. Or and accidental release of someone else's proprietary information could easily bankrupt your business. Indemnification: This is one of the most important clauses you'll see in an NDA, indeed in any contract. It sets forth the situations under which one party agrees to assume the liability for certain actions or failures to act.

They usually look something like this. Without getting bogged down in legalese, here's the gist of the subject indemnification clause. Company, that's you, shall pay for the loses or damages of ABC. That's the other side, and every single one of their directors, officers, employees, agents, stockholders, and affiliates. And as an aside, affiliates could be defined so broadly that it includes many, many other companies.

From anything bad that happens to them that is related in any way, no matter how remote to the work you do, or the warranties you offer, whether you've be negligent or not. This is scary, potentially business destroying stuff. Don't take it lightly. So now we move on to Choice of Law. The clauses explain what law will be applied regarding the interpretation and enforcement of the contract. Why are they important? Well let's say you're hired to do work for production in New York.

You're based in Florida. The contract says Delaware law will control. If there's a breach, you'd end up filing suit in Delaware. You'd have to travel to Delaware. Possibly on and extended basis. Hire a Delaware attorney. Deal with the judicial system that may be more corporate friendly than contractor friendly. All in all, not a situation you want to find yourself in. There are other integral parts of nondisclosure agreements, but these are the must haves. In the next section we'll examine a few of the gotchas that the uninitiated are often bitten by. 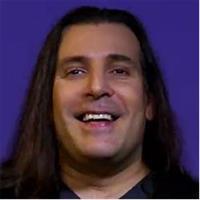 11/17/2016
Media and entertainment companies spend billions of dollars every year on creative talent. In this course—specifically designed for creatives—professor, contract attorney, indie film producer, and musician Seth Polansky pulls back the curtain and explains how to protect yourself when presented with an industry contract. Get an overview of the types of contracts that you can expect to see, the situations in which a particular type is used, and the specific red flags inherent in each. Seth discusses NDA, work-for-hire and contractor agreements, and proposals, quotes, and SOWs.

Disclaimer: This course is taught by an attorney and addresses US law concepts that may not apply in all countries. Neither LinkedIn (including Lynda.com) nor the instructor represents you and they are not giving legal advice. The information conveyed through this course is akin to a college or law school course; it is not intended to give legal advice, but instead to communicate information to help viewers understand the basics of the topic presented. The views (and legal interpretations) presented in this course do not necessarily represent the views of LinkedIn or Lynda.com.
Topics include:

Video: Anatomy of an NDA