Add impact to your ideas 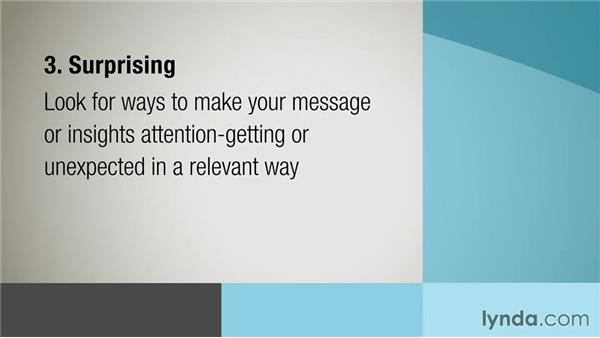 Join John Ullmen for an in-depth discussion in this video Add impact to your ideas, part of Influencing Others.

The eleventh method is add impact to your ideas. If they don't listen to it, or can't recall it, they won't act on it. To add persuasive force to your ideas, make them simple, specific, and surprising. First, simple. Express in a few words the core message or top persuasive priority you're trying to accomplish. A friend told me about how he was failing miserably in a technical presentation at a city council meeting, talking about water flow theory and such. He learned a lesson from his boss who saved the day by saying, what Joe means, is you'll be able to wash your clothes and take a shower at the same time.

Second, specific. Use concrete details to bring concepts and numbers alive in the minds of your listeners. In a famous example years ago, an organization was trying to persuade people, that a medium sized bucket of popcorn typically served at theaters, was unhealthy because it has 37 grams of saturated fat, which is 17 grams more than the recommended daily allowance. No one cared. So, they changed their message, called a press conference, and said this. A medium size buttered popcorn, at a typical neighborhood movie theater contains more artery clogging fat than a bacon and egg breakfast, a Big Mac hamburger and fries for lunch, and a steak dinner with all the trimmings, combined.

They included images too, showing three huge meals combined had less saturated fat than that friendly looking popcorn carton. It became a national story in all the major media. Third, surprising. Look for ways to make your message or insights attention-getting or unexpected in a relevant way. In my research Carla Sanger, president and CEO of the phenomenally successful LA's BEST, which focuses on helping kids who have nowhere to go after school lets out told me how one day she sat in on a session for new staff about the organization's values.

She was surprised to see the session's leader was a young refugee from Guatemala, who began by taking off her necklace and holding it up for everybody to see. This necklace, she said, is really, really important to me. It's my grandmother's necklace, and she had a terrible fate. Now I won't go into the details, but this is all she had left to remember her grandmother. She went on to ask her audience, composed of teens and young adults, think of something that, if you lost it, it would really mean something to you, it would really affect you.

They responded, pictures of their parents, trophies from athletic events, and so on. What you just talked about, said the young woman, is how you value something. Here at LA's BEST, she said, we also have values we hold very dearly. If somebody broke them, or disregarded them, or stepped on them, we would be very upset. Just like you would be upset if someone stole the pictures your parents gave you, or the trophies you won. We treasure our values. Let me tell you what they are. And then she went on to discuss each value and how to use the values to make good decisions.

It was a surprising way to talk about values, and it was a masterful presentation. Notice, she also included elements of simple and specific in her address. You can too. Look for ways to add all three elements to add impact to your persuasive message.

4/21/2014
Ever had trouble persuading someone to do something, even if it was in their best interest? Sometimes people don't budge, but thankfully you have more than rewards and penalties at your disposal. Join John Ullmen, PhD, as he explains how to influence others when you're at the "pivot point of influence," by applying 18 scientifically confirmed methods. Whether you're influencing at work or at home, you can learn what the best influencers do before they influence, and see how to choose the best steps for your situation, and have people want to be influenced by you.
Topics include:

Video: Add impact to your ideas