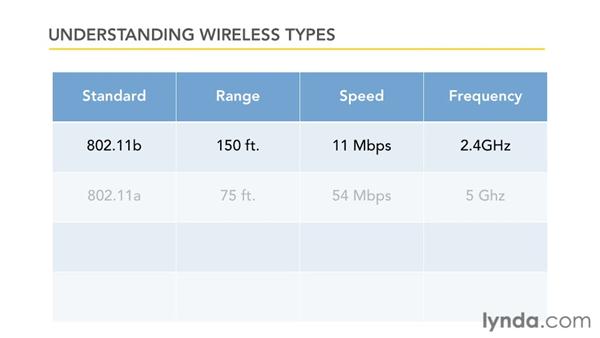 Join Garrick Chow for an in-depth discussion in this video Understanding wireless types, part of Small Office Networking to Connect, Share, and Print.

In this chapter, we're going to get into setting up and working with wireless networks, but before we getting into the details, I think it's important to have a brief overview of the current state of wireless technology. When Wi-Fi really started to get popular around early 2001, the standard in use was 802.11b. It had a range of about 150 feet, and was able to transfer data at a speed of up to 11 Mbps. It also operated in the 2.4 gigahertz frequency spectrum, which it shared with cordless phones, and other wireless electronics.

Microwave ovens also throw out interference at that frequency when they're being used. Now, 802.11b was supposed to be eventually replaced with a similar standard called 802.11a. And while it had a more limited range, it operated at almost 4 times the speed of 802.11b, and it also operated at 5 gigahertz, which was rarely used for consumer devices, meaning it would have much less interference. The problem was, by that time 802.11b had taken off so successfully that no one wanted to buy a wireless device that wasn't backwards compatible with 802.11b, because most people already had expensive devices that already operated on B.

So 802.11a never really took off, but some computers today, like all Intel-based Macs, can operate on 802.11a. But the next standard to be adopted by the industry was 802.11g. 802.11g is nearly identical to 802.11a, but it operates on the 2.4 gigahertz frequency, making it backwards compatible with B devices, which made it easier for people to transition to this standard. The problem was that if a B device joined the G network, then the speed of the entire network would have to drop back down to the maximum B speed of 11 Mbps.

So fast-forward to today where we have the latest standard called 802.11n. Wireless N has a practical range of about 175 feet, and it supports theoretical speeds of up to 300 Mbps, although realistically you'll probably get closer to half that speed. It's also capable of operating on either the 2.4 or 5 gigahertz frequency range. So it can support wireless B and G devices if you still have those devices on your network, but it will slow down the network down to the maximum speed of either the B or G devices connected.

Most modern computers and Wi-Fi devices, though, are now wireless and compatible. So if you only have those type of devices on your network, you could see some decent transfer speeds. But you're going to find that the speed and range of your network is going to depend largely on where you place your wireless router in your home or office, and that's what we're going to take a look at next.