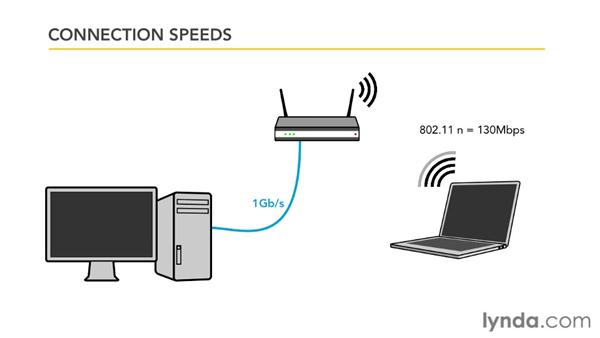 Join Garrick Chow for an in-depth discussion in this video Understanding network connections, part of Small Office Networking to Connect, Share, and Print.

Before we finish this chapter I want to go over some important information about network speeds, and how speeds are affected by wired and wireless connections. This is useful information to understand so you can make informed decisions about what equipment you'll need when putting together your small office network. Let's start with the assumption that you're going to buy the most common type of router; the all-in-one device that supports both wired and wireless connections. This type of router lets you plug in computers and other devices via Ethernet, it lets you connect wireless computers to your network, and it allows you to share a single Internet connection among all the devices connected to your network.

Now the most important thing to figure out here is to determine what kind of speed you want to have over your network. The speed of the network effects how quickly you can transfer files from one computer to another. If you don't have, or foresee, much need to transfer large files between computers on your network, you can get just about any router that supports both wired and wireless connections. Most routers support a wired connection speed of 100 Mb per second. That means that each computer connected to the router by Ethernet can transfer files to each other at 100 MB per second, which is pretty fast.

For example, a 1 GB video file would take just a little over a minute to copy over. But you'll also find that more and more routers these days are supporting transfer rates of 1 Gb per second. At that kind of speed, a 1 GB file would only take a few seconds to copy from one computer to another. Of course, this is only if both computers support gigabit speeds, which most modern computers do. The speed of the data transfer is only as fast as the slowest device, so if one of the computers only supports 100 Mb per second speeds, it won't matter that the router and the other computer support gigabit speeds; files will only transfer at 100 Mb per second.

Most computer manufacturers are using the 802.11 n standard these days, but nearly all routers and Wi-Fi devices are backwards compatible, meaning you can have older wireless b and g devices on your network, and they'll still be able communicate with each other. By the way, you can refer to these Wi-Fi standards as wireless b, wireless g, and wireless n; you don't need to say to 802.11 whatever for most people to understand what you're talking about. And again, the speed of your data transfers is going to be determined by the slowest device. So if I'm transferring a video file from my 1 Gb wired computer to my wireless n laptop, I'll be limited to about 130 Mb per second.

Now with Wi-Fi devices, you have the added element of interference. These speeds that I've listed here are what you'd get under ideal conditions, which you almost never have. For example, the further away you get from your router, the slower your Wi-Fi connection will be. You may have to bring your laptop closer to the router to get better transfer speeds. Of course, most laptops these days also have built-in Ethernet ports, so if you have a very large file to move, it's a better idea to plug your laptop into the router so you can get those faster Ethernet speeds, especially if your laptop supports gigabit speed.

So when it comes to Internet connections, the Internet is probably the slowest device on your network. That's something to take into consideration when you're putting together your network. If the primary purpose of creating a network is to share an Internet connection, and you don't foresee having to transfer a lot of large files between your computers, then you probably don't have to invest in a gigabit capable router. A 100 Mb per second router is going to be cheaper, and more than capable of distributing your Internet connection at the fastest available speed to all of your computers. Now, iff down the road you find that you are transferring a lot of large files from computer to computer on your network, and that 100 Mb per second isn't cutting it, you won't have to throw out your router and get a new one. Instead, you can buy a gigabit switch.

Then you can plug your gigabit computers into the switch via Ethernet so that they'll be communicate with each other at top speed. The switch will also be connected to the router, which will continue to perform its task of assigning each computer an IP address, and disturbing the Internet connection among all your computers, but the gigabit switch will allow your gigabit computers to talk to each other at their fastest capable speed. Okay, so I hope that gives you a decent understanding of how wireless and wired technologies affect the speed of your network.