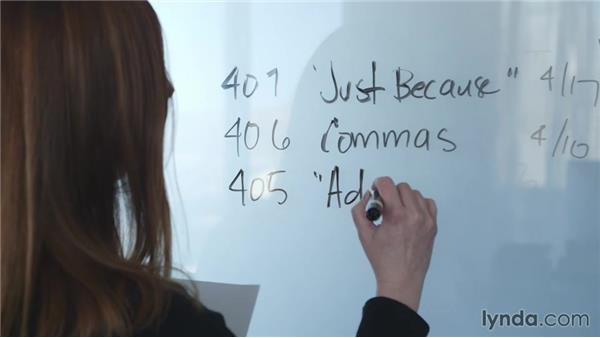 English has a lot of rules and a lot of styles. It would be a rare person who could remember every rule and every style. People often mix up words such as affect and effect, who and whom, and lay and lie, and people struggle with commas. There are more than 15 different ways to use commas. English is a shifty language. It's always changing. Today we have new words such as binge watch, selfie, and Squee.

I'm not part of the world that likes to complain about typos on menus, and go around town fixing signs with Sharpies and whiteout. I just like to help people and make learning English fun. I'm Mignon Fogarty better known as Grammar Girl. I've written 7 books on language. I produce the Grammar Girl podcast and the Grammar Girl website.

I'm the founder of Quick and Dirty Tips, and I've made the games Grammar Pop and Peeve Wars. When I started I was just a regular writer and editor like anyone else, and I had graduated from college with an English degree, and I realized I didn't know the rules I needed to know to do my job. So I was constantly looking things up in the Chicago Manual of Style and the AP Style book to find out the rules for myself. I was editing work for biotech clients and scientists aren't always trained to write well.

I noticed that my clients were making the same mistakes over and over again. They didn't know how to use commas or semicolons. Some of them didn't know the difference between which and that, and I got the idea for Grammar Girl at a coffee shop. I jotted 3 ideas down on a napkin and I wish I'd kept that napkin. I went back home and I quickly recorded 3 Grammar Girl podcasts and put them up mostly on a whim. Within 4 to 6 weeks the podcast had taken off. It was Number 2 at iTunes in all of podcasting so it all happened very fast.

Because grammar is such an intimidating topic, I wanted Grammar Girl to be unintimidating and friendly and approachable. When I started Grammar Girl even more of the material out there about grammar was snarky and condescending, and I hate that. I didn't want that for my show. I want people to be able to feel as if they can ask a question and I'm not going to mock them from their question. I'm just going to help them. So Grammar Girl girl is very unintimidating. She has a ponytail which makes her seem friendly, and even the color orange.

Orange is sort of known to be a color that induces feelings of happiness and friendliness so even the color was chosen to make Grammar Girl be something that would make people feel comfortable and that Grammar Girl would be approachable. Because I had been in Silicon Valley when Grammar Girl took off, I knew I had a business I could build on and grow. I thought that the biggest component of success was the format of the podcast.

It's short, 5 minutes. It's scripted. It doesn't waste your time and it's a fun, friendly, useful tip. Well, you can apply that to a lot of different topics. So I quickly formed the Quick and Dirty Tips podcast network and signed up people to do shows on other topics. We had the Mighty Mommy, and Legal Lad, and Modern Manners Guy. Podcasting was so new back then. It was hard to build a business model because advertising for podcasts hadn't really become a regular thing you could rely on yet. I had all this traffic, but I wasn't making that much revenue so it was a struggle.

It was actually as part of the partnership with McMillan I also signed a book deal. It was the book deal that let me quit my freelance work and focus full time on Grammar Girl and Quick and Dirty Tips. Grammar Girl here. You get a bonus show this week because I ... The way I produce Grammar Girl hasn't changed all that much. I record the show in my closet because the clothes make for good acoustics. I write the show. I script it. I go record it and I do my own production. Today we're going to talk about 2 cases where English has 2 words that mean the same thing; preventative and preventive, and orient and orientate.

Over the lifetime, the Grammar Girl podcast has been downloaded more than 50 million times. It blows my mind. It's not even a number I can comprehend. It's too big. It's just impossible to imagine. I don't think about that when I'm recording my show. I'm in my closet. I'm just talking to myself doing something I love. I love technology. It's the reason I got into podcasting first because I just wanted to play with the new technology.

When I saw an opportunity to play with game technology that was really compelling because I'm always looking for new ways to make learning fun. And what's more fun than games, right? I made an iOS game called Grammar Pop. I discovered a tool called GameSalad that let me actually make the game myself because I felt like I couldn't explain exactly what I wanted to a game designer. So part of that year I spent making Grammar Pop was experimenting with different ways it could work.

I'll hear from teachers and parents who say, "I had this kid who was really struggling "with grammar and after just a couple hours "with Grammar Pop he suddenly gets it. "He's picking out the nouns and the verbs." That's just incredibly rewarding for me. I made it for word lovers, but we're finding that teachers are picking it up so we're working on making teacher's guides to go with the game and exercises they can do with the game to make it even more helpful for class. Another invasive apostrophe and I'm full so you're up.

I'll play a run-on sentence. After I finished Grammar Pop, then I found myself wanting to make something people could hold in their hands and sit around a table and play with each other. I love board games. I play board and card games all the time. I wanted to make something like that that friends and family could sit around and do together. I came up with the idea of Peeve Wars where the peeves are little monsters, and I worked with a friend of mine, Joe Kisenwether, who's a game designer, and a great artist named Len Peralta who's known for drawing little monsters.

One reason Peeve Wars became possible now is because of crowdfunding. Before I had ideas for a game, but I had no idea how to go about selling a game idea to anyone. It's too expensive to just make a game on your own, but suddenly with crowdfunding you can get your fans to help you sort of get that seed money to make your game and get it out there. As an entrepreneur I see crowdfunding as this whole new way to fund businesses and it's exciting so I wanted to try it out just because I like to try new things.

Bringing together crowdfunding, the idea for a card game and Peeve Wars, it was just the right time. Your lucky card which means knowing that it's you, you must have I could care less. I want it. Oh, I do. (laughs) The game is all about fun so we actually even joke when we're playing it that it has no educational value. It's really just a way for people who love language and grammar to fight with their peeves. Then the instruction manual will have little blurbs about why these are peeves, and why they do annoy people.

But that's really the only educational part. In the example you had I'm feeling nauseous, but it should be I'm feeling nauseated. Nauseated. One of the best things about being Grammar Girl is knowing that I help people. I mean how many people have a job where almost everyday someone says thank you. You helped me. I mean through everything that makes it worth it. Grammar Girl will keep going as it always has. There'll be the podcast and the website. 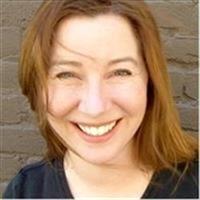 4/17/2014
Grammar is one of those topics that leaves even confident writers scratching their heads. But Grammar Girl, aka Mignon Fogarty, realized there was another way to teach it: Grammar could be fun! She started recording a podcast in her closet, which quickly became a website, a series of books—and a phenomenon, reaching over 50 million listeners. Find out how Grammar Girl evolved into the Quick and Dirty Tips network and led Mignon to develop her own iOS app—and see how she's using crowdfunding to support the development of her next venture: a board game called Peeve Wars.