Translating the language on a page 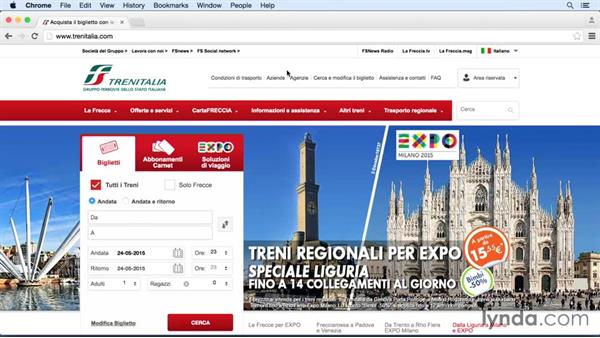 - At some point, you'll probably find yourself landing on a webpage that is not in a language that you understand. Clearly this will happen if you're planning a trip internationally, but it can happen at other times too. There's a feature built into Chrome that will automatically translate the text on webpages from one language to another. This is the webpage for Trenitalia, which is a railway company in Italy. Most people travelling in Italy will look at this webpage at some point to plan transportation. Now there are a few things that you should look for on a page like this.

First, this site does have an English language version built in. If you take a look at this page, up here at the top where it says Italiano, this is a menu I can click on, and there's an English language version. If I click on that, it loads the English version of this page. This is the first thing you should look for. Chrome's built-in translation tool is great, but if there's a version of the site that you're visiting that's already laid out in your language, that's always gonna be better.

But let's imagine that there's no English language version of this page. So let's flip back to the Italian version. In that scenario, I would use Chrome's built-in translation tool. Now it works a little differently on Mac and Windows, so we'll take a look a both. Here on Windows, on want you to look at the far right side of the address bar. When you load a page, Chrome will detect if it's in a language other than English. And if it is, it'll give you this button to translate the page.

So all you need to do is click on the translation button, it asks you if you'd like to translate the page, yes, I would, so I'll hit Translate. Every now and then when I do this, it'll tell me that the page is not able to translate, and there will be a button to Try again. Usually if you hit Try again, everything works fine. But this worked the first time, so everything looks good. And now all the text on this page is in English. Up here at the top, and here it's in English. Even these menus are all English. Now obviously it's gonna covert text, but it's not gonna be able to convert anything that's inside of a picture.

So all of the Italian language text here, this is actually built in to these graphics, so the translation tool is not gonna be able to touch that. But for everything else, everything that is plain, simple text, this is gonna work great. So that's how it looks on Windows. Let's take a look on Mac. Here in Chrome on the Mac, I'm gonna go to the Trenitalia website. When Chrome, on Mac, detects that a page is not in English, it displays this bar here. directly below the address bar.

So it's easier to see, you don't have to hunt for that translation button. But aside from that, it works the same. I can hit the button that says Translate, it'll translate this page to English. Now, this time I did get a failed translation. But it gives me the option to Try again. And usually when I hit Try again, everything works fine. Okay, and now it's been converted, and all of my text is in English. If I wanna flip back, there's an option here to Show original. And it'll load me back to the Italian language version.

So generally that's how it works. And most of the time, it's that simple. But let's look at a few variables. First, what if you go to a page and it does not automatically detect the language? If that happens, you won't see the translate option pop-up automatically. If that's the case, you might not be out of luck. What you can try is right-clicking somewhere on the page. Now, don't right-click on a menu or on a link. Just right-click somewhere in the blank background. So you'll get this right-click menu, and then there's an option here Translate to English.

So give that a try and see if that works for you. Next, there are a few options. Here on the Mac, those options are in that translation bar that pops-up when you load the page. So I'm gonna reload the page here, so it'll do that initial language detection. Then I get this bar that pops-up again. So the options are pretty easy. If you don't wanna translate this page and you just want this bar to go away, you can just hit this button that says Nope. If the page detects that it's in Italian, but it's actually in a different language, you can change the source language.

But most of this time, this isn't gonna do anything for you. If it doesn't detect the right language, chances are if you select a different language, it's not gonna translate properly for you. You can also choose this button that says Always translate Italian. So anytime you land on a webpage that's in Italian, it'll automatically convert it to English. I'll go ahead and hit the Translate button and let it finish the translation. And you can see the options change a little bit here. Again, I could change the source language, but like I said, that doesn't really help.

By default, it translates to English, but you could translate it to any of the other languages on this list. And if you wanna go back to the original there's a button right here, Show original. Now you have all these options on Windows, but they do look a little bit different. Back here on Windows, if I click on the Translate button in the address bar, you'll see a button here for Options. And from here I can change the source language, and the translation language. I can also set it to Always translate here as well.

Finally, if you go into the main menu in Chrome, down to Settings, scroll down and open up Advanced Settings, there's a section here for Language. So from here, you have some options for managing languages in Chrome. Now if you don't want it to ever offer to translate a page you can turn that off here. With that box off, it'll never pop up with the translation button. But I'm gonna turn that back on. Then, there's this button for Language input and settings.

Now this option might be a little misleading. You can add other languages to the list here, but it's never gonna change the language inside of the Chrome interface. But you can add a list of the languages that you speak. So for example, if I hit Add here, and I'll scroll through here and I'll choose Italian, now it recognizes that I can read Italian, and as long as I don't check this box it will not offer to translate pages in this language. So now the next time I go to an Italian page the translation option will not pop-up.

So if you're completely fluent in multiple languages you might wanna add them to this list. And then you won't have to bother with that translation option. So, that might be a little more than what most people need, but the basic translation tool in Chrome is the real star here. It's easy to use, and one day it might help you find your way around a foreign website.

7/9/2015
Enjoy a better Internet experience with Chrome, the web browser from Google. In this course, Nick Brazzi covers the basics of navigation and shows how to add bookmarks, use tabs, manage security and privacy settings, and use some advanced features like extensions and themes. Plus, learn how to access you Google account with Chrome and use Chrome on the go, on Android and iOS devices.
Topics include:

Video: Translating the language on a page