Determining the number of columns 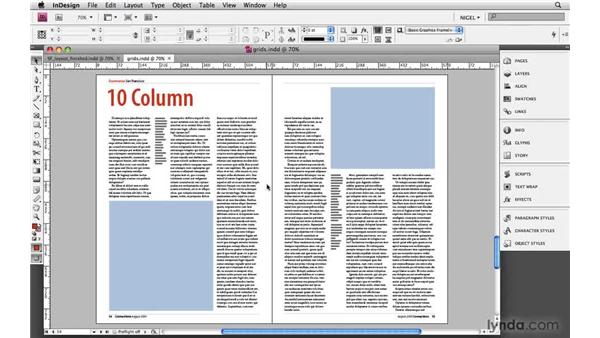 We have chosen 12 Columns but why have we chosen 12 Columns? In this movie, I would like to explore some different possibilities and justify it why we have come up with a 12-Column grid. So I have here several spreads with 3 columns, 4 columns, 5 columns, 7 columns, 9 columns, 10 and 12-column grids. We are just going to see how that affects the width of our body text frames and the width of our caption frames and the degree of flexibility that it allows us in laying out the different elements on that page.

The blue boxes that we have on the page are just picture placeholders. So firstly, beginning with a 3-column grid, we have three body text frames and I am talking about number of columns per page not per spread. We have three body text frames, each of equal width and we can use one of those columns for our captions and for white space as we are doing here and here. With 4 columns the text frames become significantly narrower and I don't think this is going to work because they are so narrow that we are just not getting enough words to the line. Things become perhaps more interesting when we work with an irregular number of columns. So here we have a 5-column grid, now if I turn on my guides you will see what I mean, here we have 1 column, 2, 3, 4, 5.

So each of that body text frames is occupying 2-column units. And this allows us a good column measure for our body text and it also allows us a sufficiently wide column for our captions for white space. And an area to occasionally move images into, to create a more dynamic looking layer. In a similar way we could have a 7- column grid where each of our body text columns is occupying 3-column units and the caption or supporting material column is occupying a single-column unit. Taking this concept a little bit further, we could have a 10-column grid. This would allow us to have 3 body text columns per page, rather than 2 and have them be of sufficient width.

However, it is going to mean that the remaining single column that is being used for the captions will be quite narrow, so you would have to work with very small caption text and presumably and not have too much information in that remaining single column. A 10-column grid might be more appropriate if you are working with a wider page than an A4 or an 8x11 type page. And then finally, the arrangement that I have got for the 12-column grid where each of that body text frames is 5- column units wide and each of that caption frames 2-column units wide and I think this provides us a good amount of flexibility. We can move the position of the caption frame around. Maybe I could have it in the outside over here, and it's also sufficiently wide that we get enough words to the line even with the caption text frames.

Let's take a look at how different numbers of columns are used in practice. So I have here some examples from magazines. Beginning with a very straight forward 2-column layout from National Geographic but interestingly the opening paragraph spans those first two columns. And bear in the mind that National Geographic is a smaller format. So the problem with using a 2-column layout for a standard size magazine would be that your column widths would likely be too wide but that's not the case here. Here we have 3-column grid which can also double, as a 6-column grid down here for this supporting information. Here a 5-column grid with each of the 5 columns of equal measure but this only works because this is a large format magazine, otherwise the columns wouldn't be wide enough. And here is a 5-column grid, similar to the one that I was showing you where we have the narrower outside column and then the text columns occupying 2-column units, similar sort of arrangement here.

And here we have a 7-column grid and here a 10-column, and you will notice that the position of that smaller column can vary from one page to the next.

5/22/2009
Building a great magazine layout can be a time-consuming and difficult process, and can involve working with a number of applications and perhaps a group of designers to achieve a satisfactory result. In Designing a Magazine Layout, graphic designer and Adobe Certified Instructor Nigel French teaches effective design and production techniques using InDesign, Illustrator, Photoshop, and Bridge to create dynamic magazine layouts. He establishes an efficient workflow using multiple programs, examines the aesthetics of integrating text with images, and teaches best practices for outputting the final document. Exercise files accompany the course.
Topics include:

Q: The instructor explains that doubling-clicking on an image while holding down the Option key on a Mac will automatically open the image in Photoshop. However, the image opens into Preview instead. Why is this happening?

A: Before this feature will work, the correct file type associations must be set up, so that TIFs and JPEGs open with Photoshop and not with Preview.
From the Finder, select any JPEG or TIF file, then Choose File > Get Info. From the Open With drop down menu, choose Photoshop and click the Change All button. Repeat this process for each of the different file types you want use. You need only do this once and it should work from now on.

Video: Determining the number of columns