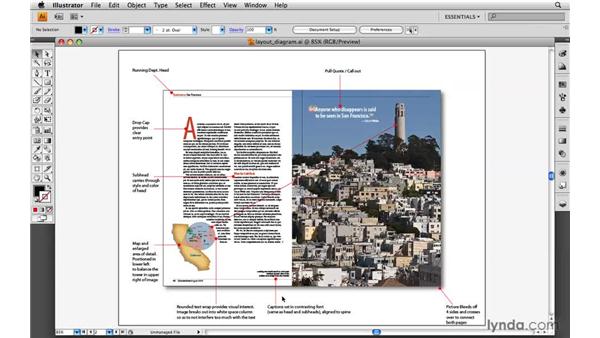 We could have begin this project at the end, what we have here is a 10 page magazine article made up of five consecutive spreads. It is for a magazine called Connections which is an in- flight magazine for a fictitious airline and every month they have a regular feature called Destination and the Destination for this month is San Francisco. So we are just going to look at the familiar parts of a magazine layout and I am going to identify them here in Illustrator with this annotated diagram.

We are getting on our first spread; we have the title which is in the color of the Golden Gate Bridge. We have an image which bleeds off of three sides. We have the Footer/Folio/Page Furniture which consists of the page number. The magazine name and the publication date. A Photo Credit, a Byline which comes out of and exists in the wider context of the Deck Head/Strapline which gives a brief description of the article and we have the running Department Head.

Let's now move to the second spread, where we see some of those themes continued in the form of the Drop Cap which is in the same font as the title and the same color, the Subhead in the same font and the same color as the title. The body text is in a different font in a Serif font. We have a Pull Quote which is set against the flat blue of the sky. The Pull Quote, quote marks are in a different front there and a tint of the orange.

A happy accident there is that tint, nicely plays off the pastel shades in some of the houses in the foreground of the image. This image bleeds off of four sides and crosses over from the right-hand page to the left-hand page unifying the two pages of the spread. We have captions which are set in eye contrasting fonts. We have map with a cored out area of detail and for visual interest this map has a text wrap. This map is positioned lower left and is balancing nicely with the tower which is positioned upper right and that's about it, for this spread.

So let's now move on to the third of our five spreads, many of the same themes continuing through. We have these navigation arrows that are going to guide the reader through the spread. We have a repetition of the big drop cap that opens the article, but much smaller because we don't want to over do it. But this provides some visual relief, breaks up a large body of text. We have a picture that is bleeding off the bottom. This here is a secondary article set in a contrasting font and distinguished by being set against a tinted backgrounded and with numerous images, anchored to specific points in the text.

Then we go on to the fourth spread. There is not much new here, same things being continued throughout and we have this common technique of an image place, lower left, counter posed with an image at top right carrying the eye through the whole spread and on the fifth and final spread rather than bleeding the images off the edge, here I'm using uniform borders around the image and because the spacing between the images is the same, it kind of ties them all together, makes a connection between them.

Again we see the captions which are set aligned towards the spine, meaning on the left-hand page, they are right aligned and on the right-hand page they are left aligned, contrasting fonts to the body text. And to finish the whole thing off, we have a little dingbat down there, a solid square to indicate to the reader that that's the end of the article.

5/22/2009
Building a great magazine layout can be a time-consuming and difficult process, and can involve working with a number of applications and perhaps a group of designers to achieve a satisfactory result. In Designing a Magazine Layout, graphic designer and Adobe Certified Instructor Nigel French teaches effective design and production techniques using InDesign, Illustrator, Photoshop, and Bridge to create dynamic magazine layouts. He establishes an efficient workflow using multiple programs, examines the aesthetics of integrating text with images, and teaches best practices for outputting the final document. Exercise files accompany the course.
Topics include:

Q: The instructor explains that doubling-clicking on an image while holding down the Option key on a Mac will automatically open the image in Photoshop. However, the image opens into Preview instead. Why is this happening?

A: Before this feature will work, the correct file type associations must be set up, so that TIFs and JPEGs open with Photoshop and not with Preview.
From the Finder, select any JPEG or TIF file, then Choose File > Get Info. From the Open With drop down menu, choose Photoshop and click the Change All button. Repeat this process for each of the different file types you want use. You need only do this once and it should work from now on.