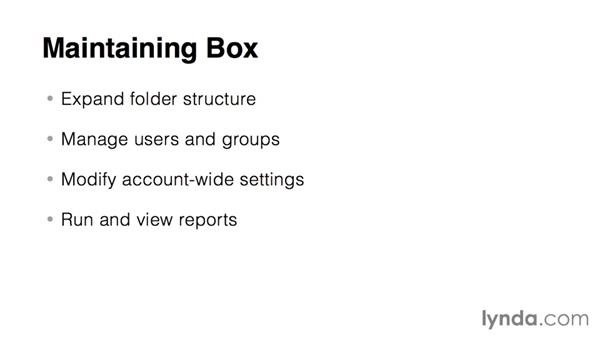 Join Gini von Courter for an in-depth discussion in this video Box administration: The essentials, part of Learning Box Administration.

- So let's imagine that your organization is going to start using Box. You're not using it currently, you have some other solution. Perhaps you have an intranet, maybe you're using SharePoint, perhaps you're just using networks shares, but you have some system you have now and you want to start using Box. The first thing you'd need to do then is to create a Box account. You would then go through the apps that are available for Box and match those up with the apps that your organization's using. Perhaps you use Salesforce and you'd want to make sure that the Salesforce app was available.

You'd then want to configure all of the account wide settings. And we do this in advance so that we're not changing those when we already have users who are trying to get their work done. And we would create a folder structure that was going to best serve our organization. We'll spend some time talking about how you choose different types of folder structures, from fairly closed to incredibly open and transparent. Assuming that you had a prior system, we would then want to migrate that content. You don't want to leave it in both places, in your network shares and in Box.

So what will you be doing if you're administering an existing Box account. Well the tasks for maintaining Box include expanding the folder structure as your business requirements change. You have a new project, there's a need to have more folders available. So if you have a managed folder structure, you'll need to be able to provision folders for people. You'll spend even more of you time managing users and managing groups because each time someone new joins your organization, you'll need to add them to Box.

And whenever you're reaching out and working with external Box users, you manage those as well, even though their called external users versus managed users. You may need to modify some of the account wide settings. For example, you might need to make new apps available for your users, or you might have some changes in security. And you'll want to be able to run and view reports so that you know how Box is being used in your organization so you can assure that Box is being used securely, and to be able to best meet the needs of your organization in the future.

Now, this is a lot of work for one person. But when you think about administering Box think about it from a team approach because this doesn't have to be something done by only one person. As a matter of fact, best practice would suggest that we'd like to spread the work around a bit and delegate some of the work of administration. So every instance of Box has an Administrator, an Admin or the Account Admin they're sometimes called. This is the person who is in charge of everything. We also have a Co-admin role and a place for Group admins, and the Group admin role is highly customizable.

Let's take a look at each of these briefly. The Admin has the ability to view and edit all the files and folders in the entire Box account, to edit the business settings or enterprise settings, to manage users and groups, even to log in to any user's account. And the Admin also is in charge of running reports. Now, a Co-admin, by default, can manage users and groups. As soon as you make someone a Co-admin this they can do. However, you can also allow them to view and edit all files and folders, edit business and enterprise settings, login in to any user's account and run reports, the only think you can't allow a Co-admin to do is to change the permissions for the Admin.

So the Co-admin can have many of the same duties but it's still a secondary role. Group admins are in charge of some types of settings for their group and possibly for multiple groups within an area. A Group admin can add users to that group, they can create a new user and assign that new user in their group, they can set folder access for the group and they can run reports for their group. The Admin for Box has a great deal of control over how much he or she wants to delegate or extend the administrative load to other people within the enterprise. 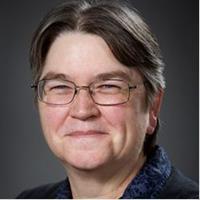 5/28/2015
Learn to administer Box, the online file sharing and cloud storage service, across your entire organization. Gini Courter covers the basic steps to get Box Business and Enterprise accounts up and running—creating a folder structure and adding content and users—and then introduces critical administration tasks, such as running reports, branding and customizing your account, and setting security options. She also shows how to use policies to enforce security and use automation to support key workflows.
Topics include: