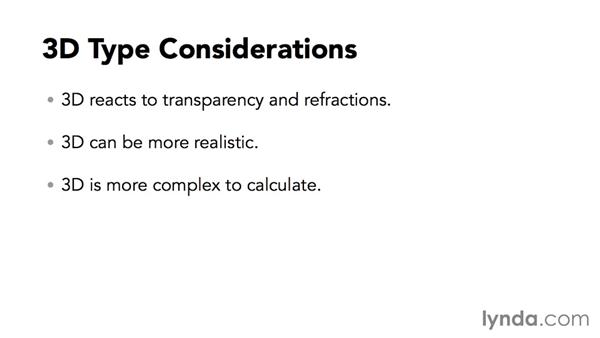 Join Eran Stern for an in-depth discussion in this video Advice for good 3D type, part of After Effects: 3D Typography.

Let's talk about 2D versus 3D typography. I'm going to start with these nice 3D type example done by Andrew Price from Blender Guru. I've edited the on top of the 3D interpretation. So, we can take a look at both images, one on top of the other, and try to figure out the differences that we need to take under account. For example, we see that the 2D type is flat of course, and by that I mean it's working in x and y dimensions.

We can also see that I've stripped everything out of the 2D image, so in this case, we don't have any colors or anything that implies that it's what I refer to as a fake 3D. Which means that it has some beveling or fake 3D depth, and more on that in the next chapter of this course. When comparing it to the 3D type, the 2D almost looks boring and uninvited.

Now, I'm not saying that we cannot improve it, and make it prettier, and more complex. But no matter what we'll do it, in it's basic form, it will always stay in 2D type. Once again, this is not a bad thing, it's just have some limitations. So, let's compare it to the 3D text that we are seeing here. This 3D text have depth, faces, such as a front, back, side, and bevels. It also have materials, or textures.

It can react to light, and also can cast shadows on itself and on the environment, in this case this glossy floor, which is also very reflective, so we can see the reflection as well. And by the way, this is not a unique 3D excluded quality, it can also happen with 2D elements that are living inside a 3D world. And act like a 3D card. Once again, more on that later. But, all of these are important considerations, when working with 3D typing side after effects, and in other software as well.

3D reacts to light, so we are seeing internal shading as well as external shadows. 3D also reacts to transparency and refractions of light. I'm not going to cover those in this course, but those are important consideration that needs to be taken under account. Next, 3D can be more realistic. Of course this is goes without saying. But, in order for it to be more realistic, it's going to take us more time to calculate.

So, we need to be aware that 3D is more complex. Hence the render time will be much longer than what we are used to in the 2D world. So here are some general advices for good 3D type in After Effects, but it is also relevant to other software as well. By that, I mean that these are themes that you should be aware of, and follow when you are preparing your 2D flat artwork inside Photoshop, Illustrator, even After Effects.

And then you wish to extrude it. Like we are going to do in this course. Once again this is true for after effects, for the plug ins that we're going to use. And also for other 3D software. So, first I would highly suggest to avoid glows, highlights, outlines and beveled types. It may look good in its 2D form. But all those qualities are very easy to achieve using a 3D render engine, so therefore, I would advise to just skip it and start with a flat text.

Try to avoid combinations of effects which can be overwhelming. This is almost like the first line, but in this case I'm referring to duplicating text one above the other in order to create what looks like a fake 3D. It can look good, and I will show you in the next chapter a couple of examples so, you'll know what are the limitations. But generally speaking, I would try to avoid adding effects if they are not necessary.

Work on the kerning and tracking. This is very important. Before you're going to extrude the text, make sure that it is legible, it's readable, and all the spaces between the letters well treated. Try to avoid scripts and grunge fonts. Those fonts can introduce a lot of problems, especially in the ages, also known as spikes. So, I would stay away from those kinds of fonts unless it is very necessary to convey the idea of the design.

Also, I will highly recommend for you to try thin weights such as light, regular, book, and normal. Remember that when you are extruding the text, you are actually adding a lot of weight to the letters. So they will be much bolder, and much heavier. Sometimes using a lighter version of the font can actually be in your beneficial, and it will create a better design. If there is a need for reflection, use capital letters.

And by that I mean that the letters are actually sitting on top of the floor, so we can see their reflection underneath. This will present a lot of problems, if you are not using capital letters, such as the descender of the G for example. A general advice is always try to keep it simple. So, less is more. And here once again, I'm returning to the four principles of good design. It needs to be simple, memorable, communicative and pretty.

In summary, when you are creating type that needs to be extruded, you should be aware of these principles, in order to get a better look, which, once again, convey your message. And help the viewer know what is the subject of your movie. If the text is our hero, we need to make sure that we are giving it the best treatment that we can.

7/17/2014
There are many options for creating 3D text in After Effects, including After Effects' own ray-traced 3D feature, third-party plugins, scripts, and now CINEMA 4D Lite. But which one is best for you?

In this course, motion graphics veteran Eran Stern discusses the options and their pros and cons. He'll also compare 2D and 3D typography, and discuss techniques to ensure your work looks great and your message is clear. Plus, learn about tools that behave like subsoftware inside After Effects, allowing you to create stunning 3D text faster than ever before. From built-in tools to advanced third-party plugins, such as Element 3D, BCC Units, and Invigorator Pro, this is your chance to find out which one suits your needs and budget.
Topics include: