3D type options in After Effects 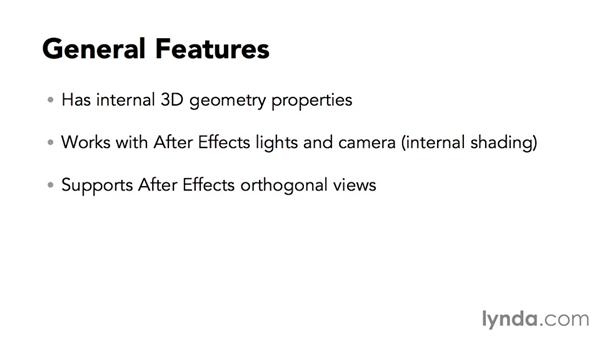 Join Eran Stern for an in-depth discussion in this video 3D type options in After Effects, part of After Effects: 3D Typography.

Let's talk about the 3D Type Options, that we have in After Effects. The first one is using a Faux 3D with effects, layer styles, or expressions. The second option is, to use the ray traced 3D engine. That was introduced in version CS6+ and above. Then we have CINEMA 4D Lite which is bundled with every copy of After Effects since version CC and this rely on the CINEWARE Effect.

Next are a couple of plug ins. The first one is Metal ShapeShifter. The next one is Boris Continuum Complete Unit 3D Objects. Then we have Zaxwerks Invigorator Pro, and last but not least, Video Copilot Element 3D. I'm going to show you each and every option on this list and we're also going to test how well each product forms within After Effects 3D World space. But, before that, I just want to speak about some general features, which are common for most of these tools.

The first one is they all have internal 3D geometry properties. This means that every plugin in this list, has the ability to control the object 3D position scale and rotation separately from the layer. Properties or, the camera animation in the scene. It will become apparent why this is so important, when we start adding motion to individual parts of the 3D text. For example, when we need to add a expression or separate the letters, or even separate the position.

In order to improve, or to match the existing design. The second thing, everyone here works with After Effects lights and camera, which means they all support internal shading. This is a very important thing for us, since we are starting with a pre-built 3D scene. Which already includes, light and camera animation. We don't want to recreate it from scratch.

Also know that it is a very common feature, that most of the 3D aware plugins, and After Effects have in common. So, we actually applying most of the plugins usually to a 2D layer, that can read all the camera information, the light, and the vanishing point, from the existing comp. Number three is, support for After Effects orthogonal views. Once again, a very important feature, which can help us to check and manipulate the comp, and the layers from different views.

For those of you who don't know what it means, orthogonal views is a way of representing three dimensional object in two dimensions. Think of it as a graphical projection. Of 3D elements in 2D space. This can help to place object in the desired 3D location, using a simple 2D view. Next item in the list, is the support for vector files.

Now some of the tools cannot access vector masks, or shape layers inside the composition. Therefore, it is important that we can still bring those vectors as in Adobe Illustrator five, or encapsulated post script, also known as EPS file format. Luckily, all those tools have the support, for one of the option or the other. The next one is, the support for motion blur. We are in good shape here, because most of the plugins support it.

However, some are not. So, I'll show you a walk around to imitate motion blur using effects. Number six is depth of field. As with motion blur, depth of field is very important, especially if you want to separate, foreground and background elements. Unfortunately this is not supported, except for the ray tracer and element 3D plugin. I'm going to share with you a walk around, that can be used in order to cheat.

But, you have to understand that these walks to some degree. The last one in the list is, one of my big things. Cast shadows on After Effects 3D layer is not supported, expect for the Ray tracer 3D engine. Now remember, I'm not referring here to internal shading. Those are supported. I'm talking about external shadows, which means that if we have some floor or wall.

Or other element in the composition that should accept shadows from other object. This are not supported, except for the Ray tracer engine. Now, this is due to the fact that the current version of After Effect, since the beginning of time and up to date. Is actually not supporting a 3D unified space. So, plugins can work in their own 3D space, but cannot fully interact with their regular 3D layers.

Of course, the exception is the Ray tracer engine, which is part of the built-in 3D World of After Effects and can cast shadows. As before I'm going to share with you a couple of walk arounds, but do note that they are walk arounds, so they will not be perfect for every situation. Okay, so now that we know what are the common general features, and what are the limitations. We know what to expect, from each one of the tools.

So we can start actually the test itself. Now, the test is going to be based around the case study project. And I'm going to share with you what I've already did, and how I built it in the next movie.

7/17/2014
There are many options for creating 3D text in After Effects, including After Effects' own ray-traced 3D feature, third-party plugins, scripts, and now CINEMA 4D Lite. But which one is best for you?

In this course, motion graphics veteran Eran Stern discusses the options and their pros and cons. He'll also compare 2D and 3D typography, and discuss techniques to ensure your work looks great and your message is clear. Plus, learn about tools that behave like subsoftware inside After Effects, allowing you to create stunning 3D text faster than ever before. From built-in tools to advanced third-party plugins, such as Element 3D, BCC Units, and Invigorator Pro, this is your chance to find out which one suits your needs and budget.
Topics include: