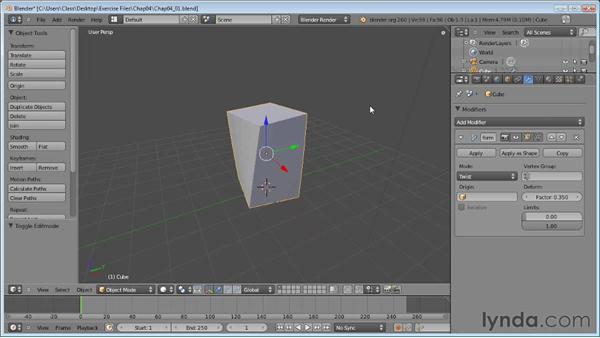 Now let's go little bit deeper into modeling and take a look at Modifiers. Now up until this point, we've been working mostly with editing tools on the Object Tools Palette, and those are pretty much one time operation. So if you were to extrude a face for example, once you have extruded it, it's done and you move on to the next operation. Modifiers are a lot more interactive and that you can come back to them and change parameters later. So this can be really handy for more complex objects.

So let's take a look at these. I am going to go ahead and right-click on my box and expand my Properties Panel, so that way I can see all of my tabs here. And I am going to look for the little wrench here and that's my Object Modifiers tab. Now once I open that up you will see, well I don't have much in here. But I do have an Add Modifier button. So let's click on that and when we do, you'll see that we have a whole lot of different modifiers that we can add to our object.

And if you have installed plug-ins into Blender, you may see even more than this. But right now, we just want to understand the concept of modifier and how it works. So let's just pick one simple modifier and use it just to understand how modifiers apply to objects and then we can move on to the more complex ones later. So let's go head under Deform and find the one that says Simple Deform. And let's just go ahead and left-click on that and as soon as we do, you will notice how the box kind of twists a little bit and that's because that's what the modifier is doing, in fact, if you can see here, the Simple Deform is in Twist Mode and we can see that.

But before we get to this part, let's go through the actual Modifier Panel and see what sort of options we have. Now the first option here is basically just the name of the Modifier and then here we have this little camera and that basically turns it on and off in the Renderer. So if we don't want this to render, turn that off, typically we keep it on. Now this second one, the little Eyeball here, that turns it on and off in the Viewport. So if you want to kind of toggle it on and off to see what effect it's having, this can be a very handy button.

This third button just shows the Modifier when you're in Mesh Edit Mode. Right now we are in Object Mode but if we were to hit Tab you can see how we can actually get into Mesh Edit mode. And now this Mesh Edit Mode here we are seeing the solid version is actually what happens with the Twist but we're also seeing the cage of the mesh as well. So we are kind of seeing two objects. If we want those two to sync up we are going to hit this little triangle box and that will go ahead and sync them up.

Now I really want to stay in Object Mode so I am going to go ahead and hit Tab and go back into that. Now to the right of this, we also have tabs that move up and down, and what those do is basically just rearrange modifiers in the stack. Right now we only have one modifier applied but we actually can apply as many as we want and rearrange them if we need to. Now along the bottom here we have a couple of options, and the most important one here is Apply. Now what Apply does is basically apply whatever we've created with this modifier and just apply to the mesh and get rid of the modifier.

So if I were to hit this, basically the modifier goes away, and my options to change anything goes away and it kind of freezes my mesh at that point. But actually I want to get this back so I am going to hit Ctrl+Z to bring back my modifier and hit an undo. And now let's go through the actual modifier itself, and this is again is a Simple Deform. So right now we're in Twist Mode and if you notice we have a bunch of different modes, we will go through these in a second. But we also have a couple of options here.

This particular modifier has a Deform factor which is how much are we twisting this object. And we also have Limits as where does this twist start and where does it end. Now we can also add additional ones. We can turn this into a Bend. So we can actually Bend the object as much as you want. We can Taper the object, we can also do Squash and Stretch. So if I wanted to stretch this object I could. So, each one of these is in this Simple Deform Modifier. Now let's say I wanted to add a Stretch and a Twist.

Well that's actually pretty easy. All we have to do is add a second modifier. So again, we just go up to the Add Modifier pull-down, and again select Simple Deform and now we have Stretch and if we scroll down, we also have that second one, which is called Twist. And if I want I can expand or collapse these just by hitting this button here, so I am going to collapse that first modifier. Now let's take a look at this Twist Modifier and let's go ahead and twist.

So now what we're doing is we are actually using two modifiers, we are stretching it in the first one and the second one is twisting it. So now we have basically two modifiers affecting this object. And so if I wanted to I could still go back up to the first one which is the Stretch, and stretch it some more, add some Limits to it, really do whatever I want and everything will interact just fine. Now if I want I can also switch these around by reorganizing them.

So if I wanted to put the Twist on top of the Stretch, I could do that. And now if I look here my Twist comes first and then we stretch. So those are some of the basics of Modifiers, and if you understand this workflow and as we use more complex modifiers, you'll also be able to understand them.