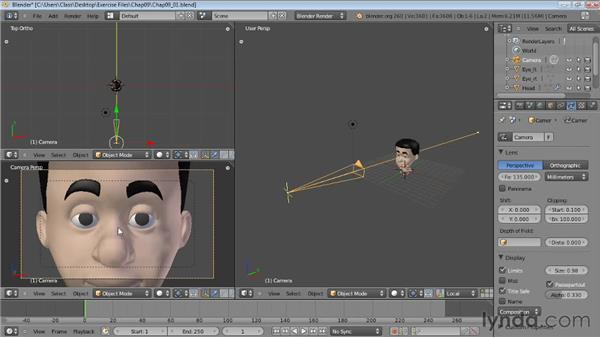 Now let's take a look at cameras and rendering in Blender. We're going to start off with the basics of cameras. So I have a camera here and if I select it, you'll see that we have a Properties panel here. And if we click on the little camera icon, we can see what the camera properties are. Now the camera has Lens parameters as well as Display parameters. So let's take a look at the Display parameters first, and then we'll get into Lens parameters. Now your Display properties really just show the limits of the camera--and we'll get into these as we go through the other variables here.

You can turn on whether or not it shows how far the mist comes from the camera. You can also turn on Title Safe, and you can see that here in the camera perspective window, and this just shows where you have your safe area in your render. We can also turn auto off and on the name of the camera, and this is in case you have multiple cameras in the scene and you want to know which one you're looking through. Now in addition to this, we have a Size parameter, which basically just grows or shrinks the size of the camera icon, and then this Passepartout is basically just how much gray do we have on the outside of this camera, in the camera perspective viewport? Now let's get into actually using the cameras, and we have a couple of options, here under Lens.

Now by default, it's set to Perspective, which is typically what we're going to be using. You want this to behave like a real-world lens. If you want, you can switch it to Orthographic, which flattens out the perspective and makes it a very flat render. I'm going to keep it on Perspective. Now when you have perspective, you can have basically a focal length, which is typically in meters, but you also can do a focal angle in degrees. They're basically the same. Now the focal length is 35 millimeters, so this is the same as a 35-millimeter lens on a 35-millimeter camera.

Now this is basically a mild wide-angle lens and if we want, we can change this to zoom in by making the focal length longer. So let's say we make it about 135, which is a good portrait lens, and you can see how that zooms in. You can also see how it kind of flattens out the perspective. So if I were to move this camera back-- let me zoom out here, here we go-- to get that character in my title safe, you can see how I've got a much flatter perspective.

If I change this back to 35 millimeters, you see how it basically goes a lot further away, but when I bring that character in so he's aligned to my title safe I have much more depth in the image. In fact, I can exaggerate this by going wide wide-angle, in fact going fisheye. Let's go ahead and make this into an 8-millimeter lens and as you can see, as I get much closer, I get a real distorted perspective, which may be good for certain types of scenes. You also can see how close that camera is to his face to get him completely in the scene.

Now I'm going to go ahead and just put this back to 35 millimeters, and again truck back the camera so that he is within my title safe. Now in addition to this, we have a number of parameters here. One is called Shift and the other is called Clipping. Now Shift basically just shifts your camera up or down depending upon what these values are, and so this is a really good way to just really fine-tune and tweak the positioning of a camera. Now in addition to this, we have Clipping, and this is basically how far into the scene can the camera see? Now this actually can be useful with special effects if you want to do stuff in the foreground and then background stuff, because what you can do is, if you move this back, as we get closer, you can see how it's starting to eliminate the grit here, and then as we get around 16 or 15, you'll see how it starts to basically illuminate the character. So this is as far as that camera will render.

So if I bring it all the way in, you can't see anything, because we don't have anything in front of the camera. It's completely clipped. So as soon as I hit his face, you can see that. And if I were to actually do a render of this by hitting F12, you can see how it only renders up to that point. We're not getting his ears or the rest of the character. So I'm going to go ahead and put that back out to a longer number. Now we have one more option here, and that's called Depth of Field, and we'll get into that a little bit later. So those are some of the basics of how to operate a camera in Blender.