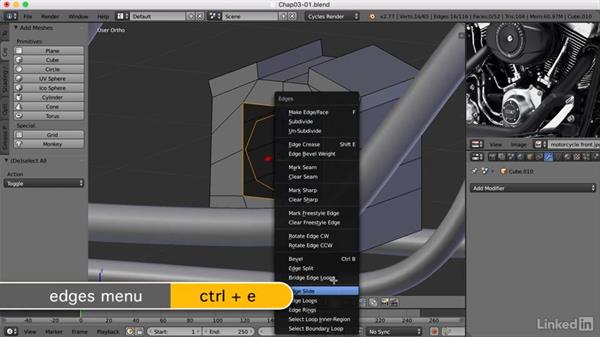 - [Voiceover] Let's begin working on the engine with this piece right here. I'm gonna go ahead and move all of this to layer one by selecting everything with the A key and then pressing M and selecting this layer right here and that'll move everything to layer one now. Now I'm gonna go over to a clean layer and go to the side view with the three key and hit the five key for orthographic view and let's work on this. It looks like it's generally the shape of a cube.

So I'll go ahead and go over to the Create tab and click on Cube and I'll hit the Z key to go to wireframe and I'll just move this right over here and scale it down to about the size that we want. I'll tumble around now and let's take a look at it with everything else. I'll bring back this layer by Shift clicking it and let's move it toward the exhaust pipes just a little bit so it just almost intersects with those.

I think that's probably what we want and that thickness doesn't look too bad there. Maybe scale it down a little bit more in the X. Let's try this. Alright, now go back to the side view and let's think about how we want to insert edges to get this basic shape. I'll tab into edit mode and let's go ahead and insert a couple of edges right in here. So I'll press Control + R and maybe scroll the mouse wheel once to get two edges and click there and now it looks like we could press Control + Tab, go to vertex mode and I'm gonna press the B key and border select this point right here to be sure and select both of them front and back and I'll press the G key and move this down like this and I'll do the same over here.

There we go. Now we've got these faces that we can extrude out to create these pieces here. So I'll hit the Z key to go back to solid mode, go to face mode and let's just extrude these out. I can hit E and bring them up and then maybe we could go to the scale tool and just scale them out just a hair like this. Just a little bit. Now we should work on this circular piece here and extruding circular objects out of square polygons is always an interesting process.

For this one, I think, what let's do is let's insert a few more edge loops here so we can delete a hole for the circular part to go into. So I'll press Control + R and let's insert an edge here and maybe one down here and maybe one more in the center like this and I think we're also gonna need one down the center here. So these are the four faces we're going to use to extrude a circular piece.

I'm gonna scale this out a bit. Something like this and get it more square like that and maybe even move it up just a hair like this. Alright, so now what we need to do is delete these faces with the X key and delete faces and now we have a hole that has eight sides to it. If I press Alt and click that edge, that'll select all those edges around that hole and you can see right up here under edges that that object has 108 edges and eight have been selected.

So let's go ahead and move the 3D cursor to this object or to this selection. So I'll press Shift + S and cursor to selected and now when we create a new object, it will pop right in there where the 3D cursor is. So let's create a circle with eight sides so we can match it to the number of edges we have here. So I'll tab into object mode, come over to the Create tab and let's create a circle. We need it to be eight sides here so I'll type eight and let's rotate it around the y-axis, so RY90, and I'll scale it down into place.

Now that we have that, I can Alt click this edge and begin extruding this out to create this piece. Now it looks as if we may need for this to be a little bit bigger. So I'm gonna press Control plus key on the numpad to expand the selection out and then I'll just scale this up just a little bit more like that. Now I can select this edge and let's begin extruding this out. So I'm gonna go to wireframe here and before I do that I'm gonna pull this out a bit like this first.

We should be able to hit E and scale in and I'll scale in to this point right about here and let's make a little ridge to signify this area here, this ring right here. So I'll tumble around to take a look at that and I'll press E and pull out. Extrude and scale in, extrude and push back in, and then I'll extrude again and one more time and this time I'll go ahead and collapse these.

So I'll press Alt + M and choose to merge these points at the center. Alright, so there we go. Now let's add a subdivision surface modifier and see how we did. We're gonna need to add quite a few edges to this I think. So I'll click over here, subdivision surface, take the views up to two. And go to the Tools tab and smooth it a bit. Now let's go over here to just layer two and take a look at it. It's kind of gloppy, kind of like a big blob and we need to I think angle this side a bit as well.

So maybe if I take this edge and just move it in some. Like this. We can begin getting an angular piece to this like that and now let's work on adding those edges to hold the corners of this. I'll insert an edge loop up here. Like so. Maybe one back here. And maybe we could use a few edges up here as well. So I'll add maybe two in here to really tighten that up.

Let's take a look at it from the side view here and it looks like we'll be able to add a few bolts here and along the sides. I think I'll put the 3D cursor back in the center of the grid with Shift + S and cursor to center and then I'll create a cylinder. And I'll give it only six sides. And maybe a triangle fan for the top.

There we go. But we don't need it on the bottom. So I will select these faces down here and get rid of these with X and faces and now this can be a nice bolt for us that we can use in a lot of these places here. So let me select these faces and then extrude and scale in and then extrude and pull down. So now this is just going to be a basic bolt that we can use in a lot of places now.

So I'll rotate it around the y-axis with RY90. I'll switch to global rotation here or transformation and let's move them into place. Alright, so I'm going to kind of generally get these in place. Here's one here. I'll press Shift + D and get this one over here. Shift + D... Here and Shift + D here now and it looks like we have a few over here as well.

So I'll put some over here and these are just added objects to give some interest here and I'll rotate them just a bit so they're not all aligned in the same way. So there we have that part of the engine. From here, we'll create the heads of the engine and then the rocker covers up here. So in the next video, we'll begin working on those. 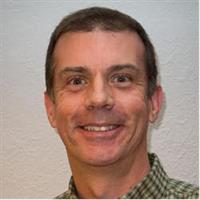 7/15/2016
Learn production techniques for hard-surface modeling a realistic motorcycle in Blender. Author Darrin Lile guides you through the process of creating a Harley-Davidson Fat Boy with proper scale and proportions. These techniques can be used to replicate any other vehicle or man-made machined parts in Blender.

Darrin begins by creating the frame of the motorcycle using curves. He then builds up the motorcycle piece by piece, creating the exhaust pipes, fenders, handlebars, engine components, and brakes. These lessons capitalize on the Path tool and modifiers like Solidify and Booleans. Finally, Darrin uses Blender's Cycles render engine to create the materials and lighting for the scene, and UV maps the textures to key pieces of the bike. In the end, you will have a greater understanding of Blender's modeling tools and production processes so that you can create vehicles and other hard-surface projects of your own.
Topics include: