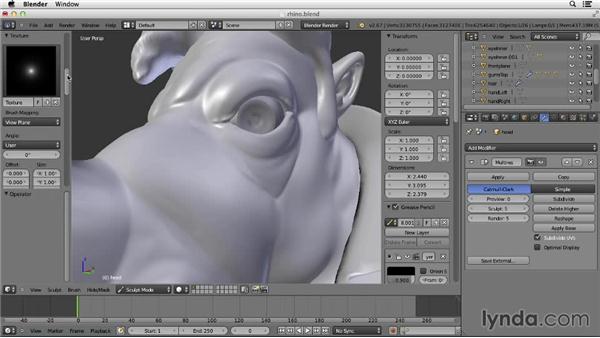 Join Ryan Kittleson for an in-depth discussion in this video Brushing with texture maps, part of Blender: Character Modeling.

The sculpting brushes, as we've been using them, are great for lots of things. But when it comes to fine details, you can actually do a lot more. For example, I'm going to make a custom alternative to the crease brush that comes with Blender. I don't like how the built-in crease brush pulls as it carves a crease, so in this video, I'll show you how to load up an image and use it as a custom brush. So let's make sure we've got our rhino selected and we are in sculpt mode. And what I want to do is just select the standard sculpt, draw brush. Now let's add an image to the brush.

So what I need to do is come over to this right hand panel, let me expand this out. And let's go in to the texture tab. And click new. Now what I need to do is change the type from clouds to image or movie. And so now we need to open a new image. And so let's go find an image to use. Now I've got one included with the course in the root of the exercise files called creasealpha. So let's open this. Okay, so now Blender has this image loaded in as a texture. Now we need to get the texture loaded into the brush.

So let's come over to the left, and let's scroll down a little bit. And, so the texture is actually automatically loaded into the brush by default when we load it into the texture tab on the right. If you happen to load in multiple textures, you could choose from them here. Okay. So let's zoom in on our character, and see what this brush does. Okay, so you can see it's making nice creases. Let me undo that. And I actually want to increase the subdivision level on this model a little bit. So let's go subdivide once, let's try to subdivide one more time.

So we've got about three million polygons in this model. If your computer can't quite handle this, then, maybe just subdivide up to four times. Okay, so let's see how this works. I'm going to hold down Ctrl and just sculpt inwards. So, what we see is it's kind of working, but it's all in dots. So lets undo that, Ctrl+Z. And I'm just going to change some settings here. What I want to do is change the stroke spacing. So, by default it spaces the texture by 10%. So every 10% of the width of the image, it drops out a new copy of it.

So what I want to do is set this to something lower, maybe three. Now let's see how it works. Okay, great. So now we're getting a much sharper, cleaner stroke. Something else that can be an issue is, there's brush mapping. And sometimes this can accidentaly be set to the wrong type. Now by default it's on a view plane but if it happens to be on something like tiled you're going to get totally weird results. So let's see what happens if we set it to tiled. Now this might be what you want, it's kind of creating an existing grid of that texture.

And then as you paint or stroke with it, it's sculpting out sort of a image in tile form. So that's usually not what you want. Now let's set this back to view plane. Alright, so let's put this brush to good use. Go ahead and make some fine wrinkles all over the model, just hold down Ctrl and just sculpt in wherever you want some fine creases and wrinkle detail. And it works a lot like the crease brush that's built in, but I like it a little bit better because it creates a sharper, tighter result, and it also doesn't mess up the existing geometry.

The other crease brush tends to kind of pull and distort things while you're sculpting. Okay, so we can use it to get some nice detail around the nostrils. going to make it look like the skin is all wrinkly. And this also might be a good opportunity to turn off mirroring. So as you get into the center line, you can make asymmetrical detail. So keep in mind that you can load almost any type of image into a brush this way. If you had a black and white image of snake scales, or hair or really anything you could imagine.

You could stroke that image right onto the surface of the model. There's about as many ways to use this feature as there are images out there. So feel free to experiment with many different effects.

8/28/2013
Learn to model a professional character design with topology that deforms properly when it is animated, using Blender, the free, powerful 3D modeling toolset that rivals many more costly packages. Ryan Kittleson starts with a mesh based on a reference image, blocking out basic shapes, and then shows how to sculpt the body, appendages, and head as well as complex details like clothing and hair. He also covers the new Dyntopo sculpting interface for shaping and subdividing meshes at the very same time. A series of challenge and solution videos near the end of the chapters allow you to test yourself on the material.
Topics include: