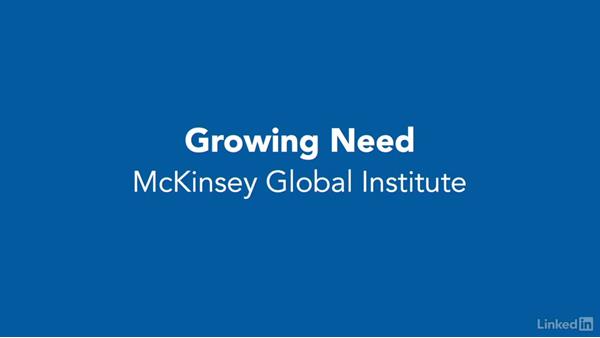 - [Voiceover] We're going to being this course by talking about the demand for data science. Now, to make sense out of that, we first need to say what data science even is. One common definition, and I'll say more about this later, is that data science is the field that joins statistics and programming in applied settings. Now, I have a couple of other possible definitions for this. These are ones that I made up. I like to think of it as the analysis of diverse data. Meaning, data that doesn't fit into common format, data no matter where it comes from, no matter how it's constituted that you need to answer your important questions.

Or even more succinctly, I like to call it inclusive analysis. Data science is data analysis that includes all kinds of data. Anything that you can use to get insight and actionable steps out of your data. Now, that may not sound like much all on it's own. But take a look at this article from the Harvard Business Review. It says Data Scientist: The Sexiest Job of the 21st Century.

Data science has rare qualities and it shows high demand. What are these rare qualities? Well, it's the ability to take unstructured data, and that can mean open text off of webpages, it can web blogs, it can mean photos, videos, it can mean any sorts of thing. The ability to take unstructured data and find order, meaning and value in that data. Now, what about the demand? Why are these qualities in high demand? Very simply, they provide insight into what's going on in peoples minds and their behaviors, and they provide competitive advantage.

Not surprisingly there's a growing need for data science. The McKinsey Global Institute projected the demand for data science in the year 2018. And here's what they found. They said that there would be a shortage of data skills in 2018. More specifically, in the United States alone they predicted a shortfall of anywhere from 140,000 to 190,000 people with deep analytical talent. So these are the actual working data scientist, the technical people who are manipulating the data and making it happen.

Perhaps even more significantly, they projected a shortfall of 1.5 million data savvy managers who could make use of the data in a business setting. Who could actually put it into context and make something happen with it. This is an enormous demand. And finally, let's just say a thing about data science salaries. Now, here's a chart that combines data from the US News & World Report on the best paying jobs in the United States. And I've inserted into it data scientist using data from a report by O'Reilly Media.

And what you see on this one, is that number one is physicians or doctors, then dentists. Data scientist would be third on this list, which is three places above lawyers. The medium salary here is $144,000, with a base salary of about $104,000. It's a very well paying field. And so, what are our conclusions from this brief introduction on demand. First off, that there is high demand for data science.

Second, there's a need for both specialists, the technicians who do the data science, as well as for generalists, the contextually oriented managers and others who put those results into practice. And of course, the pay is excellent. And taking together these three facts give a compelling portrait for data science and that's why we're going to look at it in greater detail.