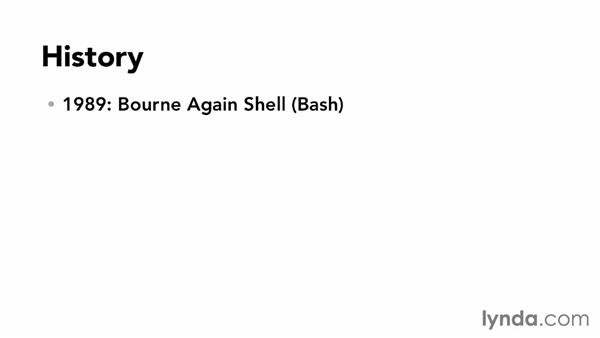 …Bash, which is short for Bourne-again shell, is…a very popular interactive command line interpreter, or shell.…It has a very long history, starting with the first…Unix shell, which was called the Thompson shell, in 1971.…The Thompson shell was very minimalistic and it lacked a lot of important features.…And it was replaced in 1975 by the Mashey shell.…That in turn was replaced in 1977 by…the Bourne shell, named for Stephen Bourne, which…had many of the features we still use,…like command substitution, various types of loop constructs.…And some commands that you're probably familiar with.…

Like cd, pwd, and export.…And it introduced some of the other built ins that I'll…be using in this course, and that you'll see in bash script.…Break and continue, getopts ans some others.…Some of these were brought in from other projects like ALGOL.…However, it was criticized for not being as friendly to use as the C shell,…which was introduced in 1978, and had a style more similar to the C language.…The Bourne shell on the other hand looks more similar to ALGOL.…