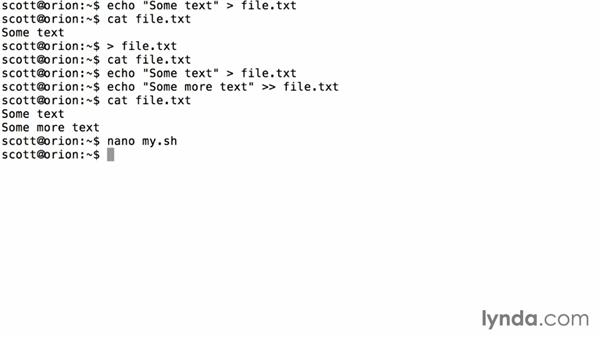 (upbeat music) - [Voiceover] Hi there, I'm Scott Simpson and welcome to Up and Running with Bash Scripts. Bash, or the Bourne Again Shell, is a widely popular command line interpreter. It's the default command line environment option on Mac OS X and Linux. It's very powerful and if you spend much time working at the command line in Mac OS X or Linux, you're already familiar with some of what it can do. The goal of this course is to get you started writing scripts for use within the Bash environment, wrapping up multi line operations in one file, implementing logic or flow control and interacting with a user to get input.

Bash is a little different from many of the programming languages you may be familiar with, however, and in this course I lay out the basic syntax and point out some of those differences. You'll see how to work with variables, numbers and control structures. Then I'll show you how to interact with a user and do a little bit of basic automation. Because your time is valuable and an in depth treatment of Bash could go on for many hours, I'll also point out some great resources that you'll be able to use once you have a solid understanding of the basics. So let's get up and running with Bash Scripts.