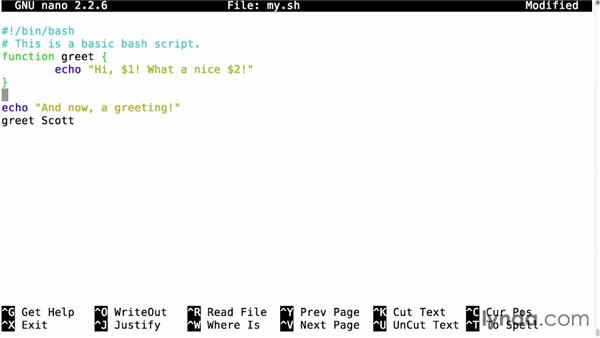 …During your script development, you may find yourself repeating code blocks.…It's a good practice to not repeat yourself if you don't have…to, and it's a whole lot more maintainable to keep things organized.…Bash functions can help out with that.…To declare one, just type the keyword, function, and…the name of your function, followed by curly braces.…Inside the function goes whatever you want to happen when the function's…called, and then to call the function, just call it by name.…I'll save that and go out to the command line to run it.…And there's hi there, echoed by calling the function greet.…And of course the contents of these functions can be as complex as you like.…

But there's on more thing that functions are great for, wrapping…up code that will process some value that you give the function.…To do that you pass one or more arguments to the function.…That's accomplished by putting values right after the function call.…And up here in the function I'll make a little bit of a change.…Need to accommodate a name and I'll use the variable…