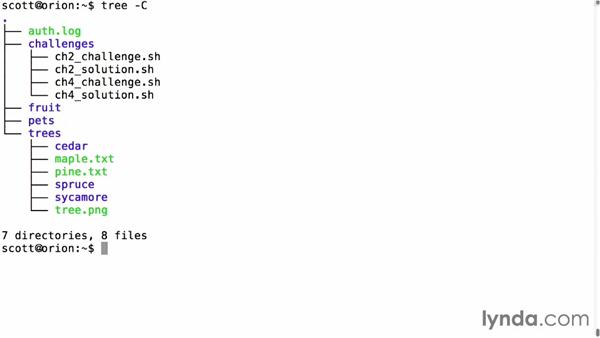 Join Scott Simpson for an in-depth discussion in this video Using the exercise files, part of Learning Bash Scripting.

If you're a member of lynda.com, you have access to the files used in this course. Here, you can see the exercise files for this course. I have them in my home directory but you could put them wherever you need to on your system. Depending on your setup, you could copy the files to a folder after unzipping them or send them to a remote machine with a utility like sftp, if that machine has SSH access enabled. However you get them to where you'll be working, here's a quick overview of the files. The first file, auth.log, is a sample of an Ubuntu authorization log, which we'll use later in the course.

There's a folder for challenges, with the challenge placeholder files, and my solutions as well. They're labelled for their associated chapters, two and four. After that, there are a few folders, empty for now, and a folder called trees that contains some other folders, which show up here in blue, and a couple files, which show up in green. There aren't any movie by movie exercise files or snippets, to encourage you to get some practice typing scripts at the command line, since that's a common place to create and edit them, but don't worry, the scripts you'll see aren't very long at all.