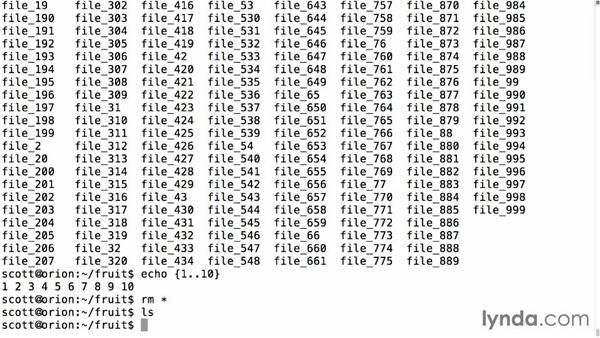 Join Scott Simpson for an in-depth discussion in this video Tilde and brace expansion, part of Learning Bash Scripting.

…Bash provides some handy shortcuts called expansions.…And you may already be familiar with one of…them even if you don't know what it's called.…If you've ever used the tilde character to…represent your home directory you've used tilde expansion.…The tilde character represents the value of the user's home variable.…The tilde followed by a dash or a minus represents the batch variable called old…PWD, which is the directory that you…were just in, if you've recently changed directories.…There's some other features as well and I encourage you…to check out the documentation on tilde expansion to learn more.…I'll step into the fruit directory here.…

Another handy type of expansion is called brace expansion.…This is written with braces around an expression, and it can…help with repeated commands with different terms or interpolation within a range.…Let's say I wanted to create a bunch of files,…but I didn't want to type each command to do so.…With brace expansion, I can type touch apple, banana, cherry, durian.…