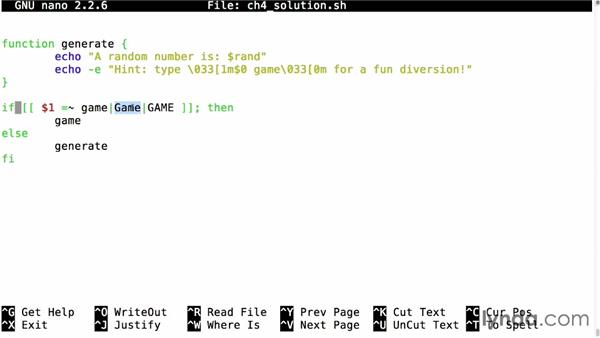 …So here's my result.…If I just run my script with no argument, I get a random…number, and if I use the argument Game, I get this fun guessing game.…I'll guess one.…No, that's not right.…Two?…Nope.…Three?…There it is, six.…I only got that on my sixth try.…I must be great at guessing.…Let's take a look at the script.…Up here at the top, I've got the shabang, and then…I set the variable Rand equal to the Bash random variable.…So every time this script runs, that'll generate a new value.…And then I set the variable secret equal to…the very first character in the string for random.…

I don't want my users having to guess a four or five digit random number,…so I'm just taking the first digit off of the string that Bash generates for me.…Let's go down to the bottom first.…So here, I'm asking if dollar sign one, which is the first argument, matches…game lower case, or game with a capital G, or game all in capital letters.…If it does, then I call the function game.…If not, I call the function generate.…So let's take a look at those functions.…