Solution: Make a script that generates a system report 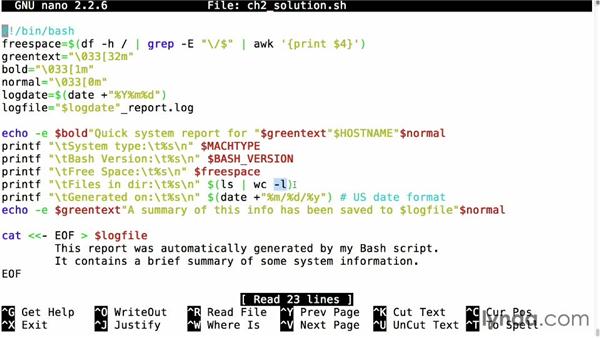 …My solution to this challenge looks like this.…Your's will probably look different.…And as long as it returns some information…about the system and looks nice, that's just fine.…Let's take a look at the script that I built for this.…Here at the very top I have the shebang…line, and then I start defining a few variables.…The first one is freespace which uses the DF command and a couple options to…get the free space available on the root…volume which is represented by the back slash.…That information is piped into grep with a…simple regular expression to match that line, and then…that's piped into another utility to print out…the specific information that I want to get at.…

After that, I have green text, bold and normal.…Which are three formatting strings that I'll use later on.…And then there's a variable called log date.…That's using the date command to print out the current date.…The four digit year represented by capital Y, the month and the day.…After that, I define variable called log file.…Which concatenates together that log date with _report.log.…

Video: Solution: Make a script that generates a system report