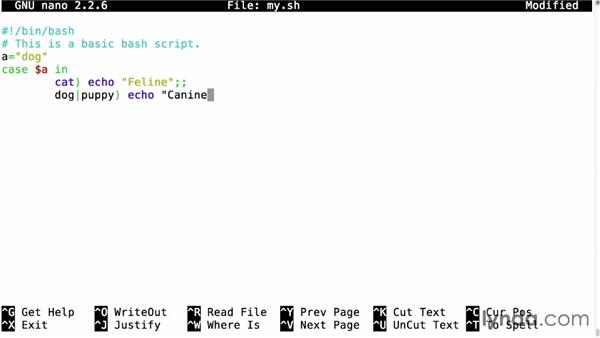 …So, what if you have a number of different things you want to test for?…Well, you could use a long series of if…statements, but there's a better way, the case statement.…Case checks a value against a series of values you provide, and it shows…up pretty often in conjunction with scripts…that take an argument to control an outcome.…I'll talk about those in more depth in the movie about arguments.…I'll set a variable a equal to dog.…Now, a case statement starts out with the word case,…followed by the variable you're testing, and then the word in.…Then on the next line, I'll put a condition to test.…

This will test if the value of a is equal to…cat, and a right parenthesis to indicate the end of that test.…That's followed up by whatever I want to do when the value matches.…In this case, echo feline, and then two semicolons…to tell Bash that you're done with that test.…And you can just keep adding test conditions.…You can use a pipe character to specify a list of things to match.…This will match dog or puppy, and if nothing matches…