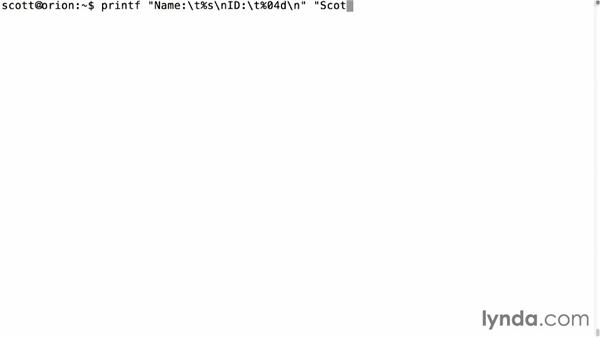 …I want to take a couple minutes to talk about DATE and PRINTF.…DATE is not part of Bash but it's really useful for certain kinds of scripts.…The DATE command gives you a format like…this, and you can use a string formatting option,…the character + followed by a format specifier in…quotes, to get pretty much any format you need.…Here I've used %d-%m-%Y.…And that gives me the day, the month, and the year.…Here's another one.…Percent capital H, dash percent capital M, dash percent capital S,…and that's the hours, minutes, and seconds of the current time.…

You can explore all of the other format specifiers…on dates manpage, and it's a couple pages down.…As you can see, there's a whole bunch of things that you can use.…And I encourage you to explore those.…I'll hit Q to quit out of here.…Another handy tool is print f, a built in that comes…with Bash, which lets you print out data with a particular format.…While you can use echo to lay out…text manually, printf gives you a lot more options.…Let's take a look at some of them.…