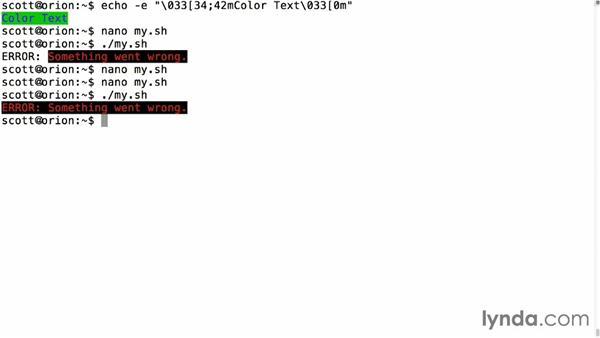 Join Scott Simpson for an in-depth discussion in this video Coloring and styling text, part of Learning Bash Scripting.

…You can style text in bash to draw attention to specific things.…Or just to make your output a little more interesting.…You can do this two ways.…The first way, is with ANSI escape codes.…For this, I'll use the echo command with…a dash lowercase e option to enable escape sequences.…The escape sequences I'll be using look like this.…Cool, but what the heck's going on here?…Let's take a look at this in a little bit more detail.…The first part, echo dash e, like I mentioned earlier tells echo that I'll…be using an escaped string, which are…special codes following a backslash or escape character.…

That lets me do the second part, the escape sequence, which is \033 and a…bracket to start, followed by a couple numbers with a semi colon in between them.…And that's all followed with a lowercase m,…to indicate the end of the escaped sequence.…The numbers represent various formatting options.…I'll talk about those in just a minute.…Then following that, I have the string that I'm…going to print out, in this case, Color Text.…