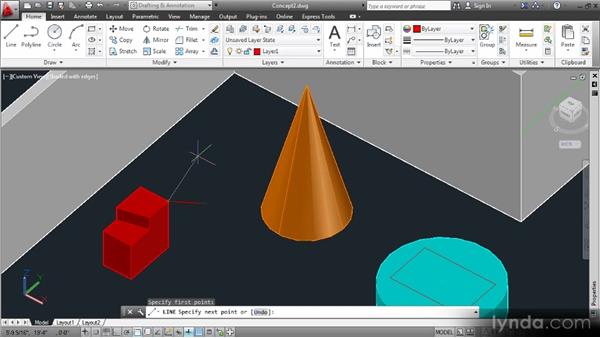 In this lesson you will learn about 3D coordinates. And how to separate coordinate entry using what are called point filters. Point filters allow you to draw objects relative to other object's coordinates. Open the Concept2 project file. And zoom into this red object. Draw a line, and snap its first point right here on this corner. Let's specify the next point using 3D Cartesian coordinates.

Now let's say that will be zero. And then comma again to say that I'm moving on to the z coordinate, and I'll type 12, Enter, Enter. So we've drawn a line that is 24 units in the x direction. That's this red direction. And you can see that either on the cursor itself or on the UCS icon. The mnemonic is RGB equals XYZ.

So that specified that point. Now, there are many occasions where you simply want to draw a line relative to another object. And you don't really want to worry about the coordinates. For this you can use point filters. For example, let's say we want to draw a line from this same start point, and we want to draw it up vertically just as tall as the cone is high. So instead of querying information about the cone and learning the coordinates, and possibly writing them down, and then inputting them, which is very tedious. It's much more efficient to use a point filter to do this work for you. So let's think about it.

Now the command line says Need Z. We've successfully separated the coordinates out, you see. Now, we still need to input the missing coordinate. And we'll do that simply by clicking on the top of this cone. Press Enter to end the line command. So I've successfully drawn a line straight up, just as tall as the cone is high. Let's try this again. Let's say this time, I want to draw a line from this corner point on this red object.

And I want to draw it in this direction. And I want it to stop right about here, lining up with the center of this cylinder. If I snap it directly to the center of the cylinder, well then we go from point to point, and that's not my intention. So, I'll go undo. Let's try this again. We'll draw the line from this point. And I want to specify the coordinates of this point in the x z plane.

And if you look at the cursor or the UCS icon, you can imagine how that plane looks. It's running on the front face of the red object, if you will. You can also see that over here on the view cube. So on the command line, I'm going to type point, x, z, Enter. And then I'm going to click right here on the center of this object. So I used the cursor to specify those two dimensions, and now AutoCAD is asking me for the missing dimension. It says need y.

So I'm going to specify that by clicking back on this original point. And then press Enter to end the line command. So point filters work by separating the entry into two different phases. In the first phase, you're asked to pick the point on the screen. And in the second phase, you're asked to either input that with a number, or you can pick another point, to specify the missing dimension. So, in this lesson, you learned how to use point filters to separate how you enter coordinates in different dimensions.

In this way, you can snap objects relative to specific dimensions of other objects.

7/19/2012
If you're comfortable with 2D drawing in AutoCAD 2013 and ready to start creating and designing three-dimensional models, this workshop from AutoCAD expert and author Scott Onstott is for you. Learn about 3D navigation and wireframing; surface, solid, and mesh modeling techniques; designing and assigning materials; placing natural and artificial lights; and configuring both direct and global illumination rendering parameters to create photorealistic renderings. With the 3D techniques from this course, you can prepare to bring your designs one step closer to reality.
Topics include: