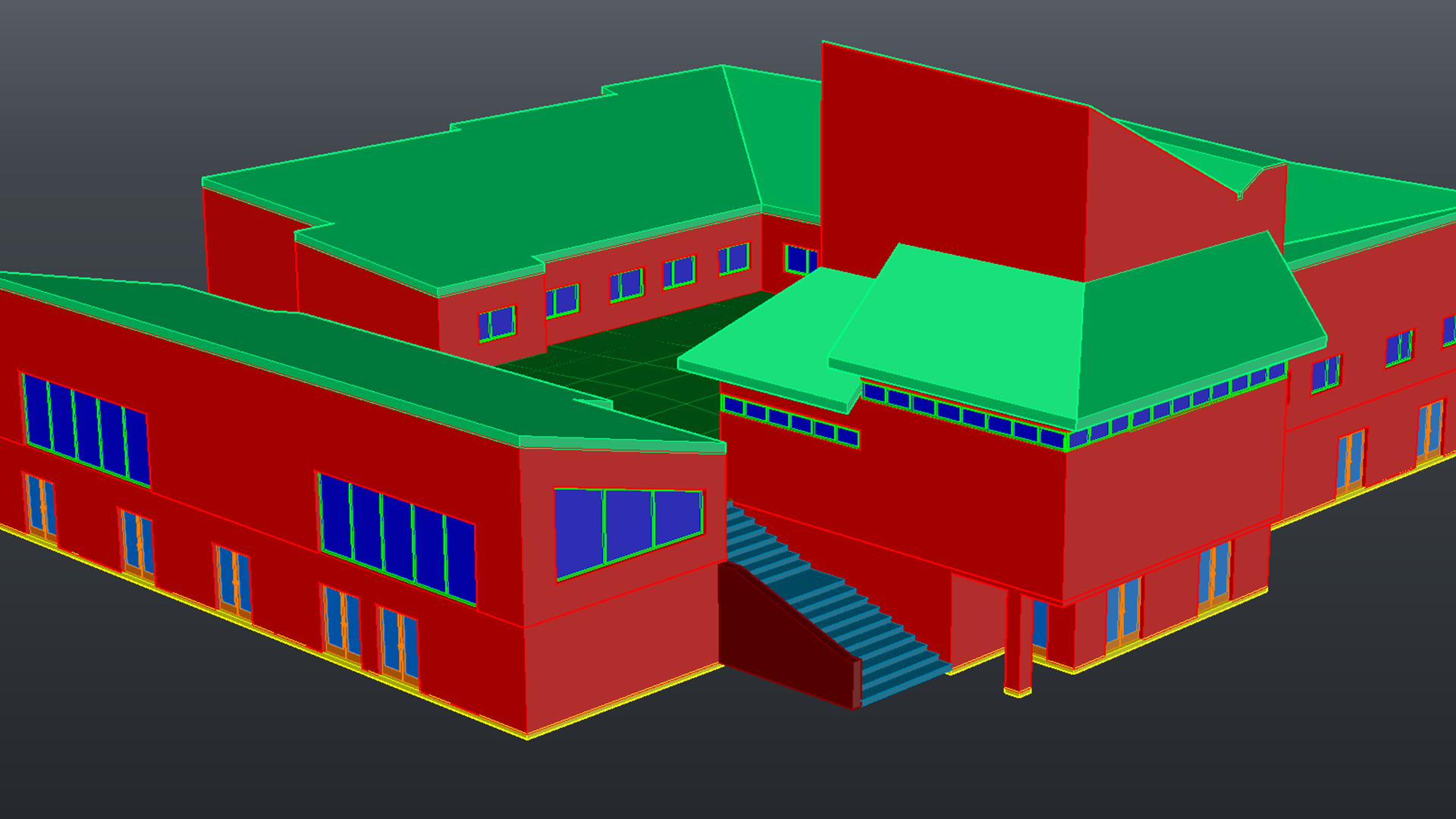 In this video, see how to rotate the user coordinate system (UCS) and draw a rectangle representing the door. You can then offset it, convert into regions, and use SUBTRACT. Plus, see how to extrude and add glazing, and then group the resulting objects to

- [Instructor] Let's create a door. So I'm going to zoom in here into this typical door opening. And I'd like to simplify things. Let's isolate the red walls layer, so I'll type layiso, enter. Click on that, enter. And let's create a new layer that will be a 3D layer, so I'll start with a dash, and it'll just be called door. I'll make that, I'll turn that layer on, set it current, and let's give it a color of orange.

Okay, now I'd like to draw a door using a rectangle. However, if I draw a rectangle, you'll see that that rectangle will end up being on the ground, and that's because when you're drafting with regular drafting tools, they're going to appear on the XY-plane. You can see the axes labeled over here. Now this is called the UCS icon, stands for user coordinate system. And we have the power to change the orientation of that system however we want.

And so, in this case, what I want to do is rotate that system so that the XY-plane is on the wall. And to accomplish that, I could rotate the system around the X axis. I'll type UCS, enter. And then I'll rotate that around the X axis by clicking the X option here. And then the default angle is 90, and you can see that here in the angled brackets. So if I just press enter, it will type in 90 for me, essentially.

And so now, the XY-plane has been rotated around the X axis 90 degrees and the XY-plane is now on this wall. So if I were to draw a rectangle now, you can see that it would have a different orientation. And that's the correct orientation in this particular case. So I'm going to erase these rectangles and then draw a new rectangle from this corner point up and snap it to the midpoint up above.

Now I'll offset that rectangle four inches. I'll type four, enter for the offset distance, click on the rectangle, and then click inside to create a new rectangle four inches inboard, enter. Now, this is going to be a glazing inside the door frame, but I don't want the glazing to go down quite so low. So I'm going to click on this and then this is a vertex that we can move using grip edit mode, and I'm going to move this up in the blue direction, so I'll click on the blue arrowhead.

Move this up, I'll type six, enter to move it up that far and then press escape to get out of grip edit mode. So now we have this kick area that is a little bit better when you hit it with your foot accidentally. It doesn't immediately break the glass. That's the idea here. We want to have that detail. Now I'd like to turn this into a door, and so right now we just have these poly lines and I'd like to convert that into a solid, ultimately.

To do so, we're going to go through a stage where we convert these into flat surfaces. And that stage can be entered just by turning these poly lines into regions. To do so, I'll use the region command, REG, enter. And then you just select the poly lines and press enter, and they're converted into regions. Regions define areas, so now, you see, in shaded with edges mode, these have surfaces associated with them.

And one of the nice things about regions is you can use Boolean tools with them, just as you can with solids. That means I can use Union, Subtract, and Intersect on the regions. If you look at the tooltips, they always say that they can work with 3D solids or 2D regions. I'll use Subtract here, in this case, and I'll start by clicking the larger object, pressing enter, and then clicking the smaller object inside of that and press enter.

The result is this surface. Now, I will extrude this region backward 2 1/2 inches. I'll type 2.5, enter. So now we have the actual frame of the door and we need to fill that in with glazing in the interior, there. So I'm going to come over to the Layer Properties Manager and make a new layer called -DOOR-GLAZE.

I'll set that current, and change the color to something more glasslike. Maybe it'll be a light blue over here. Okay, and then I'll draw a rectangle right on this front surface. And then extrude the rectangle and it's hard to select, so I'll use these last mode. I'll type L, enter to select the last object that was created, enter. And I can extrude that back.

Say, it's only a quarter of an inch thick, so I'll type 1/4, enter. Notice that I was able to extrude the rectangle directly. I didn't have to go through the stage of turning it into a region first, as I did before, but that is an option. And, of course, we did that to avail ourself of the subtraction tool that works on regions. Now, this glazing object is right on the front of the door. I'd like to move it back, I'll say M for move, enter.

Select that, enter, and I'll move it back using ortho. I'll move it back one inch, so that we have it inset a little bit there, and that will just be a nice detail. You can also include a door handle, and I don't want to spend a lot of time actually modeling the door handle, so I'm going to represent it, schematically, as a sphere. To do so, I'm going to first start by changing the current layer to door, and then I'll type the word sphere.

Then I'll Union it together with the frame just for organization purposes, so it always remains connected. But I don't want to union the glazing together with the door because then it would have to be on the same layer. So a better organizational scheme here would either be to make a block or a group and I'll just make a group which doesn't require a name. And I'll select these two objects and turn them into a group.

And then, I'll go ahead and mirror this group around from this point, over and then, we have two separate objects here. And I'll make another group, so now we're going to have nested groups. So this is a group of groups. And now, I can move this supergroup back six inches so that it's inset a bit from the front of the wall.

1/3/2019
Take your drawings from 2D to 3D with AutoCAD. In this course, instructor Scott Onstott helps you build your AutoCAD 2019 skills, one video at a time, as he steps through how to construct a 3D model. Scott shows how to extrude 2D plans into solid objects, cut out wall openings and add doors and windows, build 3D staircases, and model a complex roof surface. He also demonstrates how to create a 3D tower and sculpt the surrounding landscape with NURBS surfaces. At the end of this course, you'll have modeled a complete 3D community center based on an archetypal midcentury design.
Topics include: