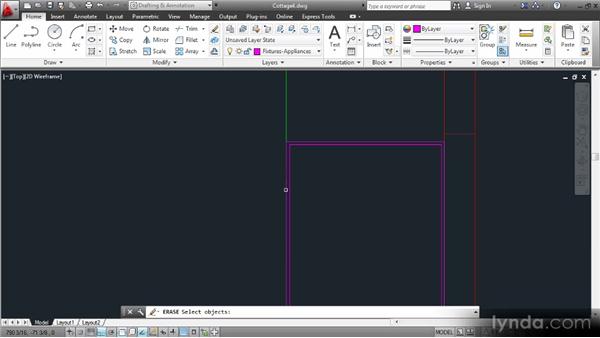 In this video you will complete the floor plan according to the cottage sketch. This includes drawing doors, windows, counters, stairs, fixtures, and appliances. Open the cottage four project file to begin. Let's work on the doors first. Open the Layers drop down and select door to make it a current layer. And draw a line down here, at this point. I'm using Ortho to make sure that the line is vertical. I'll type in thirty six, Enter, Enter, to draw in that door.

Next, open the Arc fly out and choose Start Center End. Click the start, center, and end points, to draw in the arc's swing. Then mirror the door, and its swing, around this point. And take the default option not to erase the source object. Then go ahead and draw another door over here.

And I'm not sure how wide this door is, so I'm just going to draw the door from one end of the opening to the other, and then I'll rotate the door from its hinge point down 90 degrees. Then I'll draw another arc from the start, which is in this case, over here, center, and end point. Remember arcs are created counter-clockwise. Over here we have another door that we need to draw. I'll draw a line from here, over. And then again, rotate it from it's hinge point up. It doesn't look like I quite got it.

I'm going to move that over from it's end point to the corner. And then, again, make an arc from the start, to the center, to the end. And look, the line I drew is too long. That's no matter, I can trim it off just as easily as having to redraw it. Up here, we have a pocket door that we need here. So I'm going to draw a line right across from here to here. And again an another line from the midpoint over. Now this is probably a bit large for a pocket door, so I'm going to move this up, just a little bit, right about there, to represent the pocket door. Then I will draw a rectangle across here.

So now we have two lines and a rectangle there. Well I want to get rid of everything but the rectangle. So I'll say Erase, and I'll select all three objects. And then I'll type R Enter to go to a remove objects prompt, and then type L Enter to remove the last object that I created, which in this case was the rectangle. Then press Enter Enter, and I got rid of the two lines. Now, I can move this rectangle, from its midpoint, to the midpoint of the door opening here. And I could move this over to show that it was partially open. And then I'll trim away this little segment in the middle to indicate that it's a pocket door.

Next, let's work on the counters. I'll select these lines here and change them to the Counter layer by opening the Layer drop-down and selecting Counter. Press Escape to go back to the current layer. I need to switch this back to the corner layer to make it current also. On the plan, I think we have a dimension over here that we can use, 20 and a quarter inches for that counter. I'll come over here and offset 20.25, and then I'll offset this line over. And then draw another line from here, all the way to perpendicular to the wall. Then fillet these lines together, change this line to the Counter laye,r and press Escape.

I'll set the Fixtures and Appliance layer current. Zoom in. Draw a rectangle here to represent the refrigerator. Perhaps I'll make that a little bit longer, so it sticks out, and then deselect by pressing Escape. Now, normally, the refrigerator wouldn't abut the counters perfectly, it would be a little smaller than that. So I'm going to offset this half an inch inward. And then I will erase the outer rectangle.

Oops, undo. I think I got the wrong one. Undo, and erase again. There we go. And again over here I am going to create a stove in much the same way. I'll create a rectangle, and then offset half an inch in, and then erase the outer one. And then select the object and pull it forward a bit.

Let's go over to the bathroom and draw some of the fixtures in there. We have a tub that's 32 inches wide. So let's just offset 32 and have this go over like that. This line needs to be changed to the, Fixtures and Appliances layer. I'll hit Escape. I'll draw another rectangle here, and then I will offset it in a short distance to represent the tub. I'm not sure how far that should be, so I will just click two points to represent that distance.

And then I'll click here and click inside to offset it. Enter it to end the command. Erase the outer rectangle. And then it would be nice if this was curved. I'll use the Fillet command for that. Set the Radius value, again, I don't know how far. I'm just going to click two points to represent a short radius. And then I'll use the Poly Line command, within the Fillet command, to put four fillets on that rectangle.

Okay, and I can also put in a drain up here by drawing a circle. Right at the midpoint here, I'll just zoom in and draw a little circle there and then I'll move it down vertically to represent the drain. Over here, we have some other dimensions to take care of, 31 and a half, and 37. Okay offset, 31 and a half, and again 37. The counter appears to be 22 and a quarter in depth. So I will offset 22 and a quarter, like that.

I'll use the Trim command, press Enter, and then select all these edges I don't want. I'll get rid of these two little edges by selecting them with an enclosing window and pressing the Delete key. Now over here, this should be on the Counter layer. Select it, change to the Counter layer and press Escape. We should draw a sink, and an ellipse is good for that. I'll use the Access End option.

I'll select these two midpoints and then I'll click up here. That's a bit large perhaps. I'll bring this in, and then Escape to deselect. Offset, click two points to determine the distance, and then offset it inward, and then erase the outer ellipse. The toilet is very simple. We can just copy the existing ellipse, put it over here, rotate it 90 degrees, move it down. And then we need to draw a rectangle to represent the tank. And I'm just eye balling it, so if I wanted to be a little bit more accurate I might move this ellipse from its endpoint to the midpoint of the tank. And if I want to get really fancy, I could fill it with a small radius value, using the Polyline option.

And that will soften the tank a little bit. I could also move this up just a little bit so it's not on the bowl. Okay. Now, we need to add some windows. I'll go to the Window layer and draw in some lines across these midpoints.

I'll also trim away these red lines that are in the door opening and get rid of this little red segment here. Over here it looks like we need a couple more lines to represent the windows. I will do that here. And we're almost done. I'll just zoom out here. I will leave it up to you to fill in any remaining details.

When you have completed this project, congratulations are in order for completing your first floor plan. I recommend that you go ahead make a sketch of your apartment, house, or office. And with the help of a friend, take measurements, and annotate the sketch. Then scan the sketch, sit down and bring it into AutoCAD. Make an accurate drawing. And this will really bring your drawing skills up to the next level.

7/24/2012
Tackle a real-world project in AutoCAD 2013, drawing a cottage floor plan using the dimensions given in a pencil sketch that was scanned as an image, in this workshop from AutoCAD expert and author Scott Onstott. Follow along and see why he chooses certain tools, gain insight into his drawing strategies, and watch him improvise as a missing dimension forces him to draw the plan from a new direction. Along the way, learn how to work with layers and get practice adding doors, windows, counters, fixtures, and appliances to a floor plan.
Topics include: