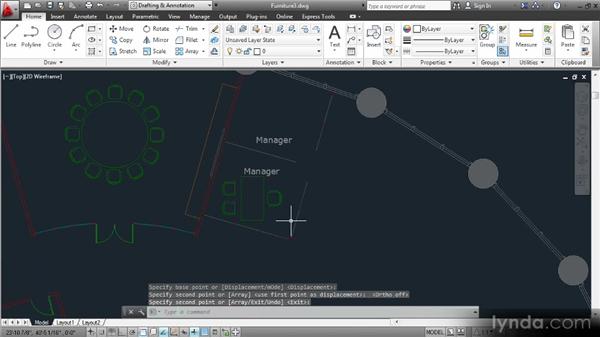 In this lesson, you will overlay external files into a furniture plan and then layout furniture groups inside the rooms of an office building. Open the furniture 3 project file to begin, then type xref and press Enter. Click this icon in the corner and select Core. Open and select overlay as the reference type. Click OK. And repeat the process twice more, (audio playing) overlying the shell (audio playing) and the tenant drawings.

(audio playing) Close the External References pallet. Let's move the furniture out of way. This will be our kit of parts that we will use to layout (audio playing) the furniture into the enclosed rooms of the office building. It looks like we have a large room up here, that might be suitable for the conference table. Move (audio playing) the conference table up there, grab it from its center point and with objects snap tracking on, track a line up vertically from the central line of the two doors.

And then I'll click right about here. (audio playing) Copy this group using Ortho (audio playing) so that it will be directly up into the Vice President's office. Now these two people have a space between them and we might want to have a seating arrangement there.

Press Tab. Now, this isn't really going to work either. It's a little awkward to have these two in the middle like that. Let's change the angle that the array is filling. Right now it's 360. Let's change that to 120. Press Tab. And then close Array. (audio playing) Toggle on group selection again. (audio playing) Click on the group. Select it's Grip and then press the Spacebar twice to cycle to the Rotate command within the Grip Editing system. Rotate the group around about like this and then move it over. (audio playing) That's better. Press Esc to deselect.

Again, copy this object from some arbitrary point located near the (audio playing) furniture and then I'll come up here and zoom in and place it in this room (audio playing) roughly. Now we need to go ahead and select the (audio playing) group, click its Grip. Press the Spacebar twice to cycle to the Rotate command. And then I'm going to eyeball it or estimate the rotation, just like that.

Now, suppose I want to have this copied right up there. I'll type ucs. Enter. And then use the Object option. I will then click on this desk to rotate the coordinate system. Then I can copy this group, using Ortho, so that it moves up perfectly in the same line up here.

Now actually these are backwards, aren't they? Because the armchair is in the entry. So let's flip them over. Mirror both of these (audio playing) about the midpoint here. (audio playing) And then, yes, we want to erase the source objects. (audio playing) And perhaps I also need to move them back a little bit now. (audio playing) There we go. Now down here on the other side of the plan, it looks like we have symmetry working for us. I need to change the coordinate system back to World. So I'll type UCS.

(audio playing) Then I will click the Close option here. Erase these desks (audio playing) and press Enter. Now, let's copy (audio playing) this chair from some arbitrary point down here. And we'll use the array option. Let's say we want four chairs. I'll type four. Enter. And then I can move the mouse here to control the spacing and the angle at which they are arrayed. I'll click right about here and press Enter.

Enter. And now we have a single group. (audio playing) So you have gained some practical experience distributing and transforming groups of furniture blocks in the enclosed spaces of an office plan.

7/24/2012
This free workshop from expert and author Scott Onstott shows how to use AutoCAD 2013 to create and arrange a number of furniture blocks and then group typical arrangements of furniture so you can lay them out most efficiently in an office space. Along the way, gain experience with AutoCAD's editing tools and exercise creative freedom by deciding how to fit your own puzzle pieces together.
Topics include: