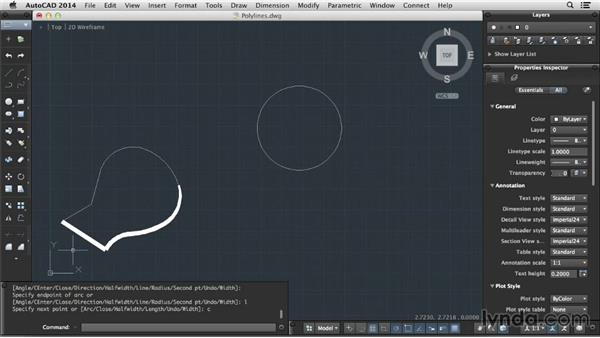 Join Jim LaPier for an in-depth discussion in this video Understanding polylines, part of Learning AutoCAD for Mac.

Another object you will use in AutoCAD for Mac is a polyline. This is a connected sequence of segments which could include lines and arcs. Polylines are unique and at ease with some special properties we can take advantage of. Polylines can be created as a command on their own, but they are also created by some other commands we will look at in a moment. Namely the rectangle and polygon tools. Polylines can also be created by joining separate arcs and lines, but we'll address that in a later video. For now, let's find the polyline command here in the drafting tool palette.

We can now specify a starting point. So I'll click here, and now I'm given a myriad of options. As I mentioned a second ago, polylines can contain lines and arcs. So I'm given an option to start with an arc instead of the default line tool. Change the width of the polygon or specify the length of the line. I'll enter four and tab over to draw a line at 30 degrees, and now I'm presented with the same set of options. I'll draw another line four units at an angle of 75 degrees, and now I'll type A to switch to arc mode.

AutoCAD creates an arc at a tangential angle to the last line I drew, so now I can specify another point as the end of my arc. AutoCAD will stay in arc mode until I type L for line, or end the command. Keep an eye on the Command prompt as there are a lot of options, including change of the direction if I do not want a tangential arc specifying the angle of the center point of an arc, or changing the width. If I type w, I can specify a width for the polyline segment. AutoCAD will ask for both a starting width and an ending width, so I can have a consistent thickness by entering the same value for both or have a line that changes as it goes.

For this segment I'll enter 0.25 for the starting width and 0.5 for the ending. Now we can see AutoCAD calculates the line for me using those widths, and I will continue to draw at the ending width until I manually change the width again. I also have the option to close my polyline, which like the Line tool, automatically create geometry to close the shape. Closed shapes are important in AutoCAD. Later we will learn to fill, and even turn closed shapes into 3D objects. For now, let's look at two other tools for creating polylines, the rectangle and polygon tools.

I'll go up to the Draw tool palette and select the rectangle tool. And I'm asked for a first corner point. Right off the bat, I can change the thickness and width. Thickness is a 3D term we'll ignore for now, but width we are obviously more familiar with. But for now, I'll just click a point. Now I can specify another point, which I will do here, but let's take another look at the options that appear after I selected the first point. I'll hit return to re-enter the command, pick a point, and now I can specify an area, specific dimensions or a rotation angle.

I"ll click area and type 50. AutoCAD now asks for at least one side of the rectangle, either the length or width. I'll type 10 for the length, and AutoCAD creates my rectangle for me. The other options are pretty self explanatory. Dimensions allow me to specify dimensions for the length and width in a similar fashion as specifying them by entering values in the dynamic input fields and pressing Tab. All Rotation allows me to rotate the rectangle, by an angle I specify. Keep in mind, if you do enter a rotation angle, it becomes the default angle for future rectangles until you set it back to zero.

The last tool we will look at is the polygon tool. I'll go select it from the tool palette, on which it is found in the expanded closed shapes panel I'm asked for the number of sides for my polygon, and I can enter a number from three to 1,024. I'll enter six, and I'm asked for the center point of the polygon. I'll click here in the center of this circle, which has a radius of 5, and now I'm asked if I want to create the polygon inscribed or circumscribed in a circle. This may seem odd, but essentially you are being asked which dimension you know, the distance from the center of the polygon to one of its vertices or to the mid-point of one of the flat sides.

For now, choose C for circumscribe and then five for the radius. We can see how the hexagon was created around the circle. Let's try this again. Hit enter for the polygon tool, six sides, the same center-point, and now I'll type i for inscribed, and 5 for the radius again. Now we can see the new inscribed hexagon has the vertices land on the same circle. Using polyline, rectangle, and the polygon tools, we can easily create a multitude of shapes as polyline's, and let AutoCAD do the math for us. 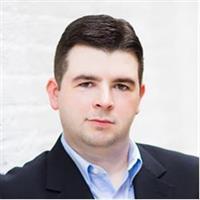 This course was created and produced by Jim LaPier. We're honored to host this content in our library.
Topics include: