Working with different types of layers 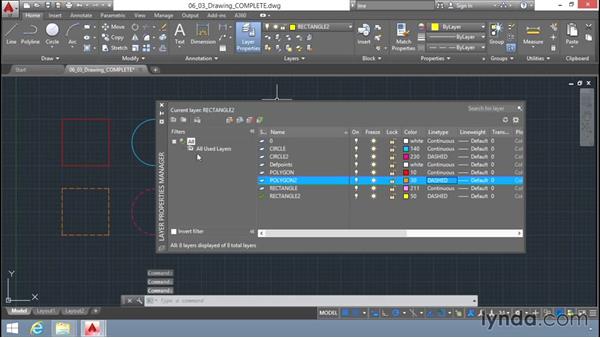 Join Shaun Bryant for an in-depth discussion in this video Working with different types of layers, part of Learning AutoCAD LT 2016.

It's using the Color of the Layer it's drawn on. And the Linetype is also ByLayer so it's using the Linetype of the Layer that it's drawn on as well. So let's go and have a look now at our Layer Properties Manager again. So that's in the Home tab on the ribbon. Into the Layers Panel here and we click on Layer Properties. Now you'll notice that some of the Layers here are all different Colors. But we haven't changed any Linetypes or any Lineweights either.

So what we're going to look at is changing some of the Linetypes and the Lineweights. Now we created a CIRCLE2 Layer, a POLYGON2 Layer, and a RECTANGLE2 Layer in the previous exercise. So what we're going to do is we're going to look at changing the Linetypes and the Lineweights of those particular Layers. So let's go to the CIRCLE2 Layer. If you click on it once it highlights nicely in the Layer Properties Manager. And give it a nice vibrant blue so you can't miss which Layer you're actually working on.

Now we're going to retain the 230 Color, that's fine. But we're going to change the Linetype. So if I click on the word Continuous now that'll bring up the Linetype Manager. And you'll see that we only have one Linetype available which is Continuous. That is the Default Linetype in AutoCAD LT. So we come down here to Load and we click on Load and that will allow us to Load up new Linetypes. Now you'll notice it's going to a Linetype file, an LIN file.

Now these are purely just Text files. So you can utilize any particular Linetype file you want to. If I click on File, there, I can go and load up a different Linetype file. So you can see we've got an lt and an ltiso Linetype file. Ltiso is the Metric, lt there is the Imperial Settings. So it's basically defining spaces, and dashes, and dots, and things, in the differing Linetypes. Make sure that you use the acadlt Linetype file.

The reason being is we want to use that one because we're working in an Imperial Drawing. If we were working in a Metric Drawing you'd use the acltiso Linetype file. Now as you become more advanced with AutoCAD LT you may want to go into those Linetype files and edit the Linetypes and create new Linetypes. You would use that in a Text Editor like Notepad, for example, in Windows. I'm not going to show you how to do that now but that's something you can consider for later use in AutoCAD LT when you become more proficient with AutoCAD and want to start creating your own Linetypes.

So we've got a whole load of available Linetypes in the default Linetype file anyway. So as I scroll down here you can see lots of different Linetypes. So I'm going to go for a DASHED Linetype, like so. So I select it there don't try and select the description because it won't let you select it. You have to physically select the name on the left. So that's loaded that now into my Linetype Manager. Now I select it in the Linetype Manager and I OK it. And you'll see that that becomes a DASHED Line.

So you can see that we've created a different Linetype now to distinguish these particular Layers even further. Now something you can do for clarity on a Drawing is you can also alter the Lineweight. Now all of these are defined up here in the Properties Panel. So if I select this particular Rectangle you can see there, look it's ByLayer, ByLayer, and ByLayer. So the Properties are all set up ByLayer. So, Color, and Lineweights, and Linetype are all defined as Properties by the Layer that the object is drawn on.

Now I can, if I want to, change the Color of this object. So if I change it to, say, that red Color there and hit Escape now to deselect it you'll see the Color has changed. However, the Layer is still that RECTANGLE2 Layer. So if I hover there can you see it's RECTANGLE2. If I go to the Layer Properties Manager, RECTANGLE2 should be Color 50, that yellow. But it's not for this specific instance of that Rectangle. Because I've changed it to have an individual object color.

If I go back to ByLayer, it adopts the Layer Color again. So you can give objects individual Colors that are not the same as the Layer it's drawn on. Be careful with that one though, because once you've done that it becomes an individual object and sometimes it can be a little bit misleading. It might be the same Color as another object, for example. So let's have a look at how do Lineweights affect our objects. So I go back to the Layer Properties and for each of the RECTANGLE2, POLYGON2, and CIRCLE2, we're going to change the Lineweights.

So let' s go to CIRCLE2. I'm going to click on the word Default for Lineweight in the Lineweight column. And I can pick one of the Lineweights that's already there. So let's go for something reasonably thick. Something like a naught .40 mm, that's just the Default setting in AutoCAD. So I'll OK that. And that becomes naught .40. Let's change POLYGON2 to a different Lineweight. Let's change that to say, naught .35. And you can see I'm giving them different Lineweights. And then RECTANGLE2, we'll change that to a much thicker Lineweight.

Let's go for 1.00 mm. And we'll OK that like that. So you can see we've got some differing Lineweights there that make the Line thicknesses thicker. If I close the Layer Properties Manager, though, none of them look any different. These ones here should have differing Lineweights. At the moment, they're just using the Default Lineweight Setting which is naught .25 mm. And the reason that they're using that is because the Lineweight Drafting Setting is not switched on. Now, it's not down here on the Status Bar in the Drafting Settings.

So you can see that that has changed on each one. So if I go to my Layer Properties now and look at my CIRCLE2, I set that to naught .40. If I change that to something like naught .60 and I OK that now, and I've closed the Layer Properties, you can see there that the Lineweights are changing. So can you see there that they've changed? And they're all differing thicknesses. Now as soon as I come down to Lineweight here let's switch that Lineweight display Off. And go back to that Default naught .25 mm Lineweight. 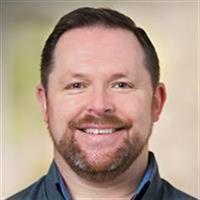 7/8/2015
Hit the ground running with AutoCAD LT, the 2D drawing software from Autodesk. Starting with drawing basic objects and concluding with simple printing and plotting, this course will guide you step-by-step through developing your CAD skills with AutoCAD LT. Author Shaun Bryant will get you to a point where you can drive AutoCAD LT on your own: navigating the interface, creating objects such as polylines and dimensions, and deftly organizing your projects with layers.
Topics include: