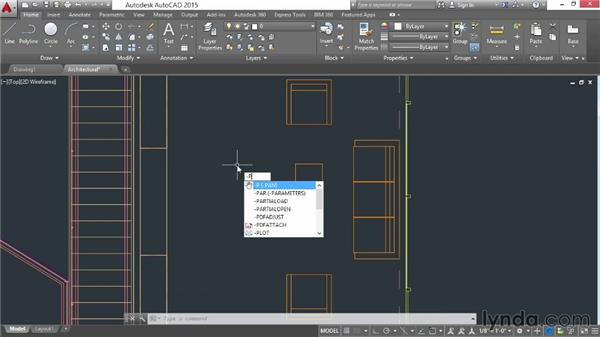 Examine an object you've created from different angles and change your point of view by panning: the simplest of all the AutoCAD operations, as it has no options. This online video details both the formal way of panning a drawing, and using commands as a shortcut. You'll learn how to exit the command and re-enter the command at any time, all with the touch of a single button.

In this video you will pan to change your point of view in a drawing. Open the architectural sample file in the chapter three folder to begin. Pan is perhaps the simplest of all commands. It doesn't have any options. I'll show you the formal method of using this command first and then I'll show you a shortcut which I prefer. So the Pan command can be executed simply by typing p + Enter. The cursor changes to this hand symbol. Click and hold the left mouse button and drag to pan. When you're panning, what's happening is you're changing your point of view.

You're not actually moving the geometry in space. It's an important distinction, if you wanted to move geometry in space, you would use the move command. Here, we're transforming the entire drawing, if you will, because we're actually moving our camera that we're viewing the drawing through. So I'm just panning, looking at different things. It's very intuitive. Notice down here, right above the command line, it says press escape or enter to exit. Or, right click to display shortcut menu. So there's three options listed here of how you can get out of the command.

Escape is the universal way to cancel out of any command. So you just press Escape, and the command is done. You know it's done, because it says, type a command, here on the command line. You're ready to do something different. I actually want to go right back into the pan command. This time, instead of typing p + Enter, I'm just going to press the Spacebar. The Spacebar works just like Enter, and you can do this with any command. You can just repeat the previously issued command by pressing the Spacebar or Enter.

So it goes right back into the Pan command. This time I can pan again, maybe I'll go over here, check out what's over here. And I want to end the command again. This time I'll press the space bar. The command is done. Let's go and try it again. I'll press Enter to repeat the previously used command. You can pan again, and go down here. And this time, I will use this last option, right click to display shortcut menu. I'll right click, and I see that I can switch to some other navigation commands, such as zoom 3D orbit, or some of the zoom options.

Zoom Window, and so on. In this case I'm just going to exit, so I'm going to click on that option in the Context menu, and the command is done. So there are many ways you've seen there to use the formal Pan command. There's still another Pan command, which is the older Pan command. And you can access that by pressing -p. All of the older commands generally are still in autoCAD. So this is great. If you learned it a long time ago you can still use your methods.

And this is also useful because some of the older commands have different options and some have advantages that you don't have in the latest command. So here we have - p for the original pan command and it asks you to display a base point or displacement. Basically, you need to click two points so that you can slide the drawing over from point A to point B. So, I'm going to click a point for point A. And then I'll click another point over here for point b and the drawing is slid over that far.

So that's a little harder to use I think than simply dragging. So, I just wanted to show you though that all of the older commands are there if you preface the command with a dash. Okay, now all of that you can kind of forget because my preferred way of panning is simply to drag the mouse wheel. Just hold down the mouse wheel and you'll see that the cursor changes to the closed hand symbol and then move, move the cursor. And I'll do that again, and again. You see this way it's kind of a shortcut, and it doesn't issue a command.

You don't see anything change down here on the command line, and it works transparently on top of any other command that you may be in. So for example I could be drawing a circle, I'll just click on Circle. And then, I'll click a center point here. And then I realize, oh, I actually want to make a really big circle, and I don't have room for that. Well, I'm going to drag the mouse wheel over here, and I can pan while I'm doing something else. This is called a transparent use of a command, because it's working in the background if you will. So I can click right here to specify the radius of the circle and the circle command is complete.

I can pan down here and see some of that circle. Now there's even one last way I can think of to pan in a drawing and that is to use the scroll bar. And they're off by default here, but I'll just show that to you also. Type o+p for options, enter, and then right here on the display tab, the first option is a check box, is to display the scroll bars. If we do that we have, the scroll bar over here on the side you can use to pan.

Now this is a really inefficient way to get around I have to say. So I don't favor it. There you go, that gives you the sense of how AutoCAD works. There are so many different ways to do the same task. And you just have to kind of navigate through all these method and find the one what works for you the best. For me, it's simply to drag the mouse wheel to pan the drawing. So in this video, we explored not only the pan command, and its variations, but we've got a little bit more familiar about how AutoCAD works with commands, and how you can cancel commands and repeat commands using the enter key or the space bar.