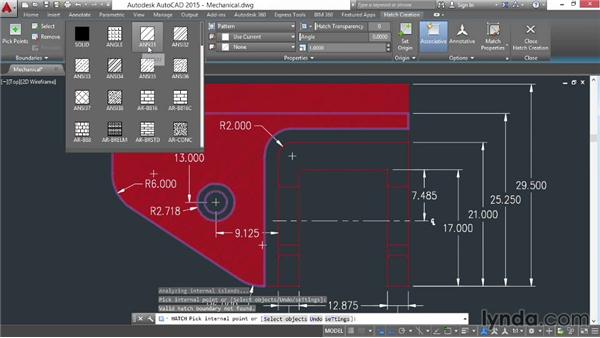 In AutoCAD 2015, using the Hatch command allows you to shade enclosed areas, often with a hatch pattern. This online video offers an overview of the Hatch command's ray casting algorithm. The tutorial also highlights the importance of zooming in when error messages appear, as these may indicate that boundaries are not completely closed.

In this video, we're going to explore the Hatch command. Open the mechanical sample file in the chapter eight folder and zoom into the top view. Make sure that you zoom in so that the entire top view is visible on the screen. I need to zoom out a bit. I'll type Z Enter and then press Enter again for the real time option. And then I'll drag downward so that I can see the entire part. I'll also pan by dragging the mouse wheel. And then press Esc.

The reason I have to be careful about this is the Hatch command uses a ray casting algorithm to actually analyze what's on the screen. So, if I'm trying to hatch this upper rectangle and part of it is sticking off the screen like that, it might no be able to find the boundary. I'm going to make sure that it's all on the screen, before I use the Hatch command. Now, let's go up here to the Draw panel. And open up this flyout menu and select Hatch. Now, the cursor should say Pick internal point.

If it doesn't, that's because someone has used Select Objects previously. The Hatch command is sticky, so that means if you use Select Objects mode, it's going to stay that way until you change it next time. So, if your cursor says Select Objects, you have to go over here and click Pick Points. If it says Pick internal point, don't do anything. You are ready to go. Now, move the cursor over the part and you may or may not see a preview image like this, in some areas it won't show a preview area like right here because it's having more difficulty determining that boundary.

It will have more luck in simpler areas like this one. Up here, you can't find it. It's not having much luck. Down here, it's okay. Now, this really is two separate regions, but AutoCAD thinks it's one. Let's zoom in there. Move the cursor around. Sometimes you can convince it to separate that into two pieces. No such luck this time, it really is random, the hatch pattern doesn't always work consistently, so you have to kind of experiment with it. Now, I'd like to hatch this area.

And I don't see a preview. But I'm going to hope that AutoCAD finds the area, and just click. In this case, it worked. Sometimes, it won't, and you'll get an error message. And you just have to zoom in a little more and try again. Like, if I go over here and click, it gives me that error message. A closed boundary cannot be determined, and there is a reason for that, and I can actually see it right here on this screen. There is a tiny gap, right there, and it is not able to find that boundary because the ray casting algorithm escapes out through that hole.

And it can't recognize this as a boundary, but let's not worry about that right now, let's focus on this single hatch pattern that we are creating. So, right now, it is coming in with the last selected pattern. In this case it's the ANSI 31 pattern. There are many patterns to chose from in this list. And I recommend that instead of clicking on these arrows, you click on this little arrow to expand the selection area. There's several different standards here that have emerged over the years AutoCAD's been in existence, there's the ANSI pattern, there are these AR patterns for architecture, there are also patterns that are just single words like brick, cork, clay, there's also gradient patterns and you go down further, you'll find the ISO standard patterns.

So there's sort of sets of patterns that you can choose from and they appear in different scales. So, this one here is too dense, evidently, at a scale of one. Here's where you set the scale. Let's change that to a larger number. Let's try five. I'll type five and press Tab to have that take effect. That looks better. You can also interactively change the angle by grabbing this over. And you can optionally make it more transparent. And this is nice so that your hatch patterns don't really visually dominate your drawing, but they appear more in the background.

This will still give us a sense of materiality to the object. This is steel, and that's all we want. We don't want to have this compete visually with the dimensions. I'll make it a little brighter so you can see it at least while we're designing it. Now, over here, you can change the color, specifically, to something else. I could make it blue, and it also has an optional background color. What if we had an orange background with blue lines on top of that. These are all possibilities.

I'm going to clear that out and say no background, none. I will also clear this out and say, assign the color by the layer. Let's open the Properties slide out. Right here, we can choose a different layer. We're using the current layer, which is layer part, right now. I'd like to open that up and choose Layer Hatch. So, now it assumes the color of layer hatch, which is yellow. Another thing you can do with hatch patterns is set the origin point. Click this button and zoom in on a likely origin point like this corner.

Snap to that point and the hatch pattern will line up with it. This is very helpful when you're making tile patterns, for example. You want them to line up. Let's expand the Options slide out. And over here, we have different ways to detect islands. Let's open that up. Normal island detection works like this. Where the point that we clicked is hatched. And then the next boundary within that is not hatched. And then the one within that is hatched again.

And you can kind of tell that from this icon. Hatch, No Hatch, Hatch. This one is just the outer area. This one is ignore all the islands and just hatch everything. So, I think in this case, I just want to have the outer island detection on, because I don't want to hash the hole. Gap tolerance is helpful when you want to bridge over gaps like you see down here. So, if I increase the gap tolerance to some small value, though I don't really know what the units are here.

And I'm just going to increase that a little bit, and then I'll click down here, and we still have a problem. Continue hatching this area, and maybe increase the gap tolerance more. And then click down here. No such luck, we'll have to try another approach. In the next video, I'll show you how to create a hash pattern by selecting objects. And that's a more robust method of creating boundaries.