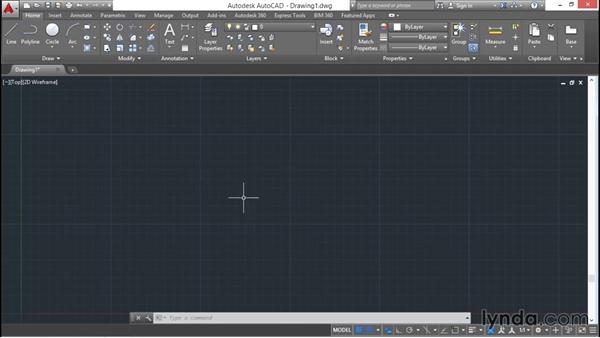 - In this video we'll explore Grid and Snap. These two features allow you to draw objects constrained in space. Go down here to the status bar and toggle on these two modes, Grid and Snap. To control their spacing, click this arrow and choose Snap Settings. This opens up the Drafting Settings dialog box and we're focused on the Snap and Grid tab. You can toggle on and off Snap with F9 and you can toggle Grid with F7. By default the Snap spacing is half a centimeter in both X and Y directions.

And I'll leave this unchecked so that the grid won't sub-divide smaller than one centimeter. Let's make sure that we have Grid Snap and Rectangular Snap selected and click okay. So now what we're looking at is a grid with major lines every ten centimeters, so each little box inside of here must be a square centimeter. And if you zoom in, by rolling the mouse wheel, you'll see that the grid does not sub-divide below a centimeter.

I'll zoom out. And at a certain point, things get simplified so we're not looking at the individual centimeters anymore, we're just looking at every ten centimeters. I'll zoom back in a bit. This gives us a good visual indication, just like graph paper does, of the regular organization of space. Let's go ahead and draw a line and as I move the cursor, notice what's happening, it's sort of jumping. That's because of Snap. We're snapping to every half a centimeter, you see that? I can snap to these intersection points of the minor lines and I can also snap midway between them.

So I can draw a line along here, and I can tell just how far it is. And I don't have to enter any numeric values, I can just rely on Grid to help me determine how big things are. And I'll just go ahead and draw a rectangle and press enter to end that line command. So it can be nice to use Snap in situations where your geometry happens to conform to such a scheme. And I'd say generally that's rare unless you're making mechanical parts that just happen to come in half centimeter increments.

A more flexible approach that we'll cover in a future video is Object Snap. And that allows you to snap directly to geometry that you draw in space. But this more primitive, or more fundamental system of Grid and Snap allows you to draw objects that happen to conform to a regular grid. So let's go ahead and draw another line here and you'll see that I can't draw it to any place other than this spacial grid. If I wanted to, for some reason, draw a line to some other arbitrary point, I would have to come down here and toggle off Snap.

Now the cursor moves smoothly and I can click anywhere I want. Alternatively we could hide the grid and use Snap and then we have that sort of implied grid, although we don't see it, it's still there and it's still operative. And we don't have to use Ortho and we don't have to use Object Snap. So there you have it, Grid and Snap. Two aides that assist when you're creating objects that happen to conform to a spacial grid.