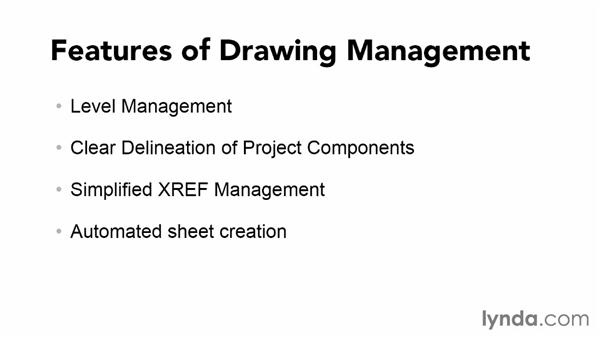 In this chapter we're going to talk about the drawing management system in AutoCAD Architecture. But just what is drawing management? Well drawing management is and approach to organizing a collection of project files to make them all behave together as a single project. Now, we should probably get started with talking about what some of the common project set up approaches are for people using AutoCAD in all it's flavors. There's lots of different variations of approaches that people take. Sometimes they just use a bunch of layers.

So everything is in a single drawing and they'll have lots and lots of layers, and they turn things on and off as they need them to create the different kinds of drawings and views that they need to print up their project, sometimes they use layout tabs. So they'll go to the different layout tabs and they'll set up one for each type of drawing. And then they switch between the various layout tabs when they want to print stuff. Sometimes they use XREFs. So they'll just put things in different drawing files and then xref them together and XREF just maintains a link between two different drawings. You might see combinations of any of those other three approaches or frankly, there could be other approaches that I haven't even considered or seen yet that people are using, or really any combination of those.

The bottom line is that it's far from a single, standard approach that you would see among different architectural firms specifically. And then certainly, if you include the wider audience of AutoCAD users, then I'm sure it's all over the map. So that brings us to the project navigators system. So, Drawing Management, as it's called, is an attempt to take all these disparate approaches and unify them all into a single procedure and process that we use to organize projects when using AutoCAD Architecture.

So, in my opinion, this is really the preferred way to manage your projects. You really ought to manage your projects using the Drawing Management system. It provides automated and semi-automated XREF management. So there will be a lot of XREFs involved in setting up a drawing management project but most of the setup will be handled in a pretty painless way by the system. It incorporates all of the AEC object features. So we don't give up anything that we've already learned about how walls, doors, windows, display system, any of those things behave.

It only enhances. It doesn't take anything away. It can accommodate projects of any size or type. So there's no minimum file size or maximum file size if you use Drawing Management. To me, it's just the way to set up a project. And if you're using the sheet set functionality from regular AutoCAD, that is fully integrated into the drawing management system. So you don't sacrifice anything there as well. Okay. So what are some of the features of drawing management? Lets take a look at that. Well one is level management. I mean most building projects have multiple levels.

So you have your first floor, your second floor, your roof, your site level. What you can do is setup a list of all the levels that are important to you in a project, and then keep that list of levels in the project navigator system. Not only that, it will actually create the various drawings and XREFs using those levels. There is a very clear delineation of the various project components. So, because we're going to have different kinds of drawings that have purpose built functions, it's going to be very clear what the purpose of each file is for, throughout the project.

The XREF management, I've already talked about, is going to be largely automated and simplified. And sheet creation, the same, likewise, will be automated and simplified. And all of this behind the scenes, will maintain a large and robust collection of project data. So we're going to be able to generate reports or export data as necessary. So it's more than just drawings and graphic that we are creating. We are creating a complete project repository. So the final thing to note here then is some terminology.

The most important terminology in the project management system is the different file types. So we're going to have constructs. All of these file types are drawings. So ultimately they're just dwg files. But each of the different file types that I'm listing here have a specific purpose. So what a construct is, is some physical portion of your building model. It will represent something real in the project. So what I often tell people is, if you can reach out and touch the object when the building is built, then that object ought to be in a construct when you're drawing it on AutoCAD architecture.

So of course that includes things like walls, doors, and windows, but it's also going to include things like furniture and equipment and fixtures and all of these sort of things. So if it's a physical object, it's a real object, it goes in a construct. Constructs are unique. So, you don't ever want to duplicate the same information in more than one construct. If you do, it kind of defeats the purpose of the system. So, your goal is to take your overall building model and break it up into several constructs. You can have a few Constructs.

You can have a lot of Constructs. It really doesn't matter how many they are as far as the systems concerned, the quantity will really be tied to, the style of project and the complexity of the project. Now related to constructs are elements. Now elements can largely be thought of optional. But in some projects, particularly, larger more complex projects, you have portions of the project that are repetitive. So, if you have a typical toilet room or a typical stair tower and you want to use that configuration in more than one place in your building, you can create that as an element and then that element becomes easy to repeat in other locations.

So the two were tied together but the view is the actual drawing. It's tied to a particular scale, a particular type of drawing, and a particular type of discipline, like architectural, or mechanical, or plumbing or so on. And then finally we have sheets. Now of the four, sheets is the one that's the most self explanatory. Every sheet in your final document set that you print out will have a sheet file in the drawing management system. So that will be a separate drawing file, set up in paper space with a title block that you add your views to.

And you use the sheets for printing out your document set. If you don't need to print, you probably don't need a sheet. So those are your file types. In the next several movies, we're going to begin creating our own custom project. Putting it all together, and putting all of these concepts into practice.