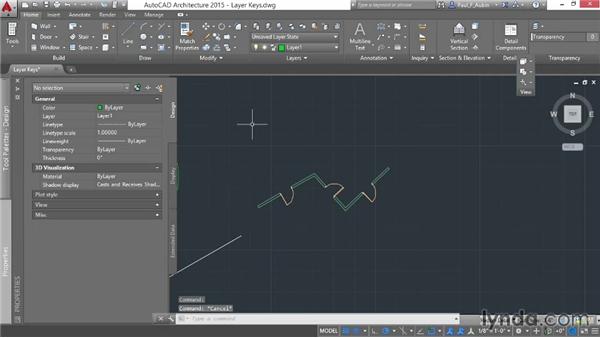 In this movie, I'd like to talk about layering and layer keys. When you create drawings in AutoCAD, they go to a layer, specifically whatever layer you have current. But what is a layer? Well, a layer is nothing more than a. Setting that you can apply to objects that determine things like its color and whether or not its turn on or off and so on. They are an organizational tool for the drawings. Now, if you are just using the standard AutoCAD objects, objects like lines, arcs, circles, then they just automatically go to the current layer. So, for example if I take a line command here and I just start to draw it. You'll notice that it comes in in this white color. I'm going to escape out of there and the reason it comes in, in a white color is if I look at my home tab on my layer panel, you can see that I have this drop down right here.

Now there's only two layers currently in this drawing. There's layer zero and there's defpoints. Now layer zero, you can see, is white and defpoints is a cyan color. Defpoints is typically used by dimensions so we're not really going to use that layer right now but layer zero is your default auto cad layer and so if you don't create any other layers then everything would go in on that layer zero layer. Now, up here is the layer properties dialog. So if I click that, that will open the layer properties manager.

Now this is actually dialog that you can move, and even if I came over to the edge, you can dock that on-screen, it actually behaves like a pallet. But I'm going to leave it undocked and just kind of floating here in the middle of the screen. Now, what I want to do is, right up here, on this little toolbar that is built-in to the properties manager here, I want to click the new layer' icon. It's going to suggest the name, Layer 1, which I'm going to accept. And then, over here, in the color column, I'm going to change it to a bright green color, maybe this color, right here, click okay.

And, the line type, I'm going to change to a hidden 2 line type which'll give it a dashed line pattern. And, you could go down the list here and assign all sorts of properties. So, all I really want you to see is that you can create a layer, assign it a bunch of properties, and then the elements that you add to that layer will automatically take on those properties. Now I want to work on that layer so I'm going to double-click it and that will make it the current layer and you can see that by this green check box that appears here. Let me close the Layer Properties Manager and this time I'll just draw a circle.

And notice that the circle comes in in that greenish color, and you might need to zoom in a little bit to see that it's a dashed line, but you can see that it is in fact using a dashed line style. So, that's standard AutoCAD. Now if you want to learn more about layering in standard AutoCAD you can check out the AutoCAD Essentials courses that we have here at lynda.com. And there are several movies there that talk about layering and how layering works in AutoCAD. But for the remainder of this movie, I want to talk about how layering works specifically in AutoCAD architecture.

Because AutoCAD Architecture does something a little bit more sophisticated with the layering. I want to remind you that, currently, we only have layer zero, layer one, and Defpoints in this drawing. Now I'm going to come over here to the tool palettes, click on my wall tool, and begin drawing some walls. Doesn't matter how many you draw, or what size, or orientation they are and I will press enter to get out of the command. And let me close this little tool tip here. Let me go to the tool palate again, pick the door command.

Go ahead and place a couple of doors. It doesn't matter how many or where you put them and, again, I will cancel out of the command. Now, you may be noticing that these 2 element types that I've just added, wall and doors, are different colors and where did those colors come from. Well, if I select the wall and I come over here to Properties notice that it's on a layer called A-Wall. And if I cancel out of there with the Escape key and select the door next and go to Properties, notice that it is on a layer called A-Door.

Not only that, I'm going to deselect again. If I open up the list of layers, in addition to A-door and A-wall, I now have two other layers that start with G, A, N, and O. So there's some sub-layers that got created as well that are used by these objects. So what this tells us is, that AutoCAD Architecture is not only putting elements on separate layers automatically. It's actually creating those layers on the fly if necessary. How does it do that? So it does that using a mechanism called layer keys. So hard coded into each element type in AutoCAD Architecture is the concept of a layer key.

Now lines arcs and circles don't use that concept, so lines arcs and circles you still have to. Set the current layer before you draw those elements if you want them to go in a certain layer, but when it comes to an AC object like a wall, a door, a window, a roof, a stair, all of these elements have a built in layer key. Now if I go to the big A menu here, the application menu go down to drawing utilities and then come over here to drawing setup. That's going to display the drawing setup dialogue.

Now, this is a multitab dialogue that displays, and there's a layering tab right here which I'm going to click on and this is where the layer key information comes from. Now notice here at the top, there's a Layer standard key file and it's called AC layer standard. Now that file is just installed with the out of the box software, inside that file there are several layered key styles. Now the one that I'm using is the default one which is the NCS 256 color, n, NCS stands for National Cad Standard.

Now, I'm going to choose that and click OK and then I'm going to repeat the process that I did a moment ago. So, here's a wall. Cancel out of the command. Close this tool tip. Here's a door. Place one or more doors, cancel out of the command. Select the object, go to properties. Now, notice that I have a layer called A210G and I have another layer for the door called A315 G. So, the BS1192 system uses a very different method of naming the layers.

Now, it turns out that they're the same colors, but they don't have to be. So, inside those layered keys, it has rules that tell it how to name the layers, what colors to use, what line types and all the other settings. And what will happen is, whatever one is active at the time you start creating objects, AutoCAD Architecture will automatically create those layers on the fly and put the objects on those layers. So using the layer key system, which is built into the software, we get this very powerful benefit of being able to automatically have all of the AC objects that we create.

Not only know what layer they're supposed to go on, but go on that layer automatically and even create it on the fly if that layer doesn't exist. If you don't like the layer standard that's installed by default out of the box, you can easily change it to another one. In fact, you can even use different layer standards in different drawings, for different clients. So if you have a one client that needs one layer standard, another client that needs another, you can easily swap them out as needed. So the layer key system is a very powerful feature which takes all the tedium out of working with layers in Autocad Architecture, and largely automates the entire process.