Establishing a measuring system of units 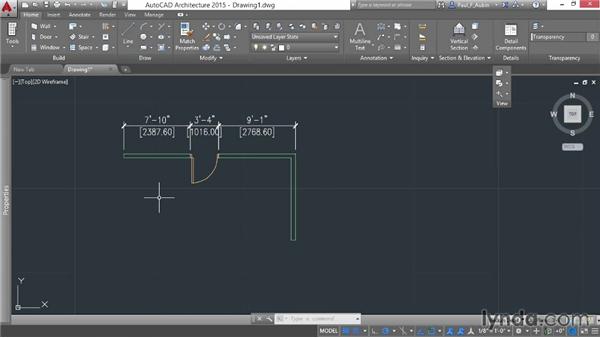 Like to take a moment to talk about the units that will be used as a measurement system throughout this course. This course is being authored in the imperial measurement system. However, AutoCAD Architecture can work equally well in imperial units, or in metric units. In fact, when you installed the software, it's likely that it included more than one icon on your desktop, allowing you to launch the software in the measurement system of your choice. So, I've got an AutoCAD Architecture U.S. Imperial icon here and another one here for U.S. Metric.

So, if your preference is to work in metric units, it's recommended that you double-click this icon to launch the software. It is possible to change the unit's system that you're using, after the fact, once you're already in the software. But since so many of the tools and features rely on the units in the measuring system. It's a little better to launch from the appropriate icon, because it will change all of the settings when you do that. So if you need to switch units, it's ideal if you can quit the software and then launch back in to the other icon.

However, if that's not possible, if you happen to already be in a drawing and you need to convert it, it is possible to convert the drawing. But there are definitely a few things you should be aware of when trying to do so. So, I'm in a really simple drawing here and I've got a few elements in there and I've put some dimensions just for reference. So there's a couple of approaches you could take here. You could simply convert the units of the drawing but I think working with the dimensions might actually be helpful to understand what you're getting. So it's actually possible in AutoCAD to have a dimension display the dimension value in two different units.

So let's look at that first. I'm going to select this dimension that I have right here on screen. Right-click and I'm going to choose a command called Edit Dimension Style. When I get in this dimension style dialog, I'm going to click the Modify button right here and then you'll notice we've got primary units and alternate units. So currently my primary units are set to Architectural which is U.S. imperial, that's in inches, and if I click on Alternate Units, I can check this box to display the alternate units. They're going to be in decimal format, multiplying by 25.4 which is the multiplier between inches and millimeters.

Down here you can say that you want to put that number below the primary value instead of next to it. So let's click OK, and Close. And now you're going to see that I've got my imperial number here and my metric number here. Now that may be all you need just to kind of give yourself a little bit more comfort when you're working in an imperial drawing is to just create a dimension style that has an alternate unit and then you can measure things and just kind of, compare them to what you expect them to be. If that's no suitable and you actually need to convert the drawing, then you can do that here on this menu with the big letter a.

So you go to this big letter a menu, it's called the Application menu. You come down here to Drawing Utilities, and then you go over here to Drawing Setup. In this dialogue, the first tab is Units, and you can see that the drawing is currently in inches. I can open-up that choice, and choose Millimeters instead. When I click OK, it will ask me if I want to rescale the objects in the drawing. Now I think it would be a pretty good idea to do this, otherwise they're going to be the wrong size. So I'm going to choose this rescale option right here, and then the objects will go off-screen because it's rescaled the entire drawing.

To get them back on screen, you can use this icon over here in the corner and just click right where it says Top. And that'll just basically re-zoom in on that object. Now, the multipliers I'm using for the dimensions don't make sense anymore. But, if I select this object, And I come over here to Properties, you can see that the width of that wall is 152 millimeters. If I cancel out of there, and then select this door, the width of that door is 914 millimeters. So, it did scale the objects correctly. It's just that those numbers may not make perfect sense in terms of standard sizes in other locales.

But at least they're dimensionally correct. So, if we want to fix the dimensions, we basically just select the dimension and repeat the process to go to Edit Dimension Style. And then, what I would do is just reverse the alternate and primary units. So, for the primary units, I'm going to chose Decimal. And for the alternate units, I'm going to choose Architectural. And then for the multiplier, I'll put in 0.0394, which is just 1 divided by 25.4, close out of there. And now you could see that I've got the millimeters on top, and the feet and inches at the bottom.

So that's how you can convert an existing drawing. Now, I do recommend that for the duration of this course, that you go ahead and work in imperial units. The concepts we'll be covering apply regardless of the unit measuring system that we're using and I try and keep the input of units at a minimum, so I think you'll find that if you follow along in imperial units, it won't be all that uncomfortable and it'll be much easier to follow along in the lessons than trying to constantly convert the files.