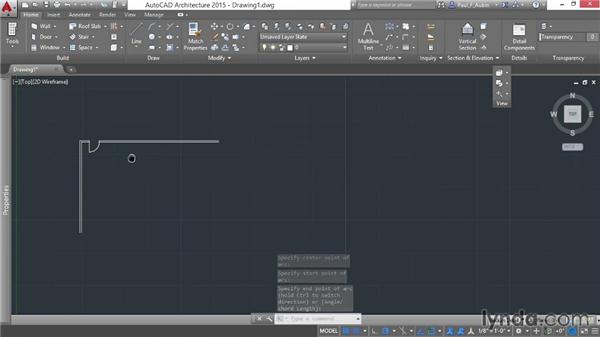 In this course we're going to be talking about AutoCAD Architecture. But just how is AutoCAD Architecture different than AutoCAD? Well, AutoCAD is a program that allows you to do technical drafting with accuracy. Now, that applies to just about any discipline you can imagine. If you are an architect, if you are a plumber, if you are a circuit board designer, a set designer, furniture designer, you name it. If you need to do technical drawings, you can use AutoCAD to create those drawings.

AutoCAD Architecture has all of the features that AutoCAD has, but it has additional features that are specific to the discipline of architecture. So, it has tools that are unique to the building design industry. So, where AutoCAD has standard primitive geometries like lines, arcs, circles, and rectangles, AutoCAD Architecture has all of those, but also has walls, doors, windows, roofs, and stairs. So what I'd like to do is do a really quick little demonstration comparing and contrasting the two and give you a sense of what these two programs are like.

So, if I was trying to do an architectural drawing using plain old AutoCAD, I would have to start with a basic Line tool. So I would go to my Line command and I would start to draw some lines on screen. And then I would have to offset those lines to make the thickness of my walls. And it might look something like this. I'd have to trim those lines up to clean up this intersection. And if I wanted to add a doorway in this location, I'd have to draw more lines, offset them again, trim again and then I'd have to add my door.

Now, chances are, most firms are going to have a door symbol already predesigned. We call those a block in AutoCAD. But, just the same, that block would've had to been created by somebody and it might look something like that. With a line and an arc. Now, once I've done all of that, then I have to look at these objects and say, well they're all white and they're all on a single layer called zero. So, then I'd have to go into my layers and start creating layers for them.

And put them on different layers so that it'd have the ability to turn things on and off separately from one another. I'll skip that step. Now, let me compare that to the same process in AutoCAD Architecture. Here, instead of starting with lines and offsetting, I would start with a wall. Now, I draw the same basic shape. But it would take fewer clicks because drawing a single wall gives me both sides of the wall. It gives me a thickness. And up here, it automatically cleans up at the corner.

Better than that, if I add a door, that door will automatically cut a hole in that wall. Now later, if I wanted to move this door, that door moves by itself and does not take the hole with it. But if I decide to move this door, it moves along the wall, and the hole follows along with it. Notice that these objects here are different colors. When I select them, you can see over here on the Properties, that that is on a layer called a-wall, where the lines here were on a layer called zero, and just simply white.

This one is on a layer called a-door, so not only are the objects coming in and interacting with one another, but they're also going automatically to a predefined set of layers. And then, finally, if I change my viewing point to another angle, you can see that the stuff that I drew in standard AutoCAD is just simple flat two dimensional line work but the stuff that I drew with AutoCAD Architecture elements is so much more. So, throughout this course, we're going to be focusing heavily on the AutoCAD Architecture specific techniques and tools and using the basic AutoCAD techniques only when they provide value to our overall process.

So, with that, let's go ahead and get started learning about AutoCAD Architecture.