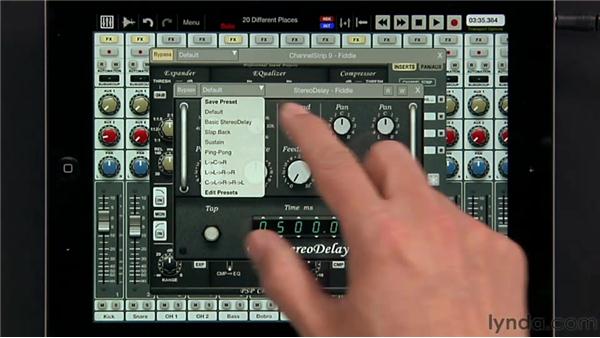 Join Garrick Chow for an in-depth discussion in this video Using inserts and plugins, part of iPad Music Production: Auria.

Okay, let's continue looking at the PSP ChannelStrip.…I'm going to work with Fiddle. Let's solo that and bring up the ChannelStrip.…In addition to the three main processors, the Expander, the EQ, and the Compressor,…the PSP ChannelStrip is also where you will find the Insert plug-ins.…Here in the Insert section is where you can add up to four plug-in effects.…Now, I currently have ClassicVerb on the first insert.…That's because we recorded the Fiddle with some Reverb, but by default all the Inserts should say None.…So, you can tap None to see the available plug-ins, and you can see we have Classic…and Convolution Reverb plug-ins, both Stereo and Mono, as well as Delay, Chorus, and ReTune plug-ins,…all of which come with Auria.…

ClassicVerb is a very simple reverb effect module that isn't very taxing on the iPad's processor.…It just has 4 Dials to adjust the Time, Filter, Mix, and Output levels.…Selecting a reverb automatically turns it on.…So, if I play this track, you can hear the effects right away in real time.…