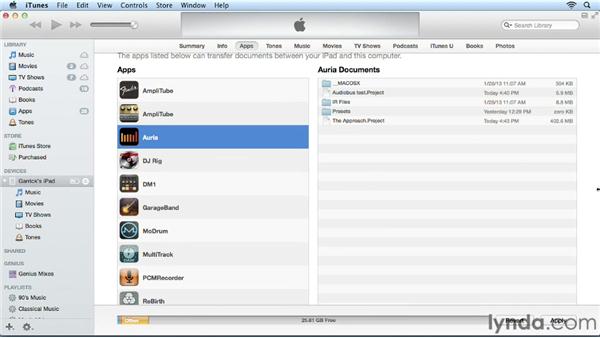 Join Garrick Chow for an in-depth discussion in this video Using the exercise files, part of iPad Music Production: Auria.

If you are a Premium Member lynda.com, you have access to the access to the exercise files that come with this and other courses. We've included a couple of different versions of the project files I work with throughout this course that you can import into your own copy of Auria to play around with. In order to load them, you have to connect your iPad to a computer running iTunes. Then in iTunes, select your iPad, click Apps, and under File Sharing locate Auria, click Add to navigate to the project file and select it.

You can see at the top of the screen, the file is now copying over. And then in Auria on your iPad, go to Menu ? Load Project, and here you'll find all the projects you've created in Auria as well as any you've loaded from iTunes. Just select the one you want to open. And at that point, you're ready to start recording, editing, or mixing the project.